Please welcome Yolanda to VampChix!  We always love hearing from authors of vampire stories!  Yolanda will give away an eBook copy of each of her books, HEART AND SOUL and THE VAMPIRE ORACLE: DEATH.  So leave a comment and show Yolanda some love!  [Winners will be announced on Wednesday.]

My Love for Vampires... 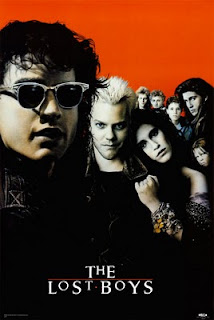 You know, every time I read an article or hear a whisper about the vampire genre going out of style, or being so overdone that it's time we left the bloodsuckers behind and concentrated on another monster, I have to shake my head. I don't agree. I say bring on the vamps!

Seriously, I'll never get sick of vampires. Whether I'm reading, writing, or watching them, that's totally cool with me. They're just so awesome. So adaptable. So easy to take and twist into your own myth. Personally, I can't get enough. Some of my most fave books are vampire books.

When I was a teenager, I spent a lot of time on my own. We used to live several suburbs away from my school, so all of my friends lived pretty far. That's when I started watching horror movies. I loved them and would lose myself in the gore. Then one day I saw the trailer for a little movie called, The Lost Boys. Man, I wanted to go and see it at the movies but my parents didn't let me (Boo!) but when it hit the videos shops, I was there. It featured a cast of young actors that grabbed my attention, and the vampiric tale was awesome. I loved it so much that I watched it a thousand times.

And so began my love for vampires.

I was so inspired that I wrote a novel about a teenage girl who falls in love with a 200-year-old vampire. I know that story's been done now and is a huge success but when I wrote it, it was just mine. There was nothing else like it out there. Well, not until years later when I started reading any and every vampire book I could get my hands on.

I haven't stopped reading and watching ever since, and have even had a few of my own vampire stories published at several places.

One of the things I love about vamps is how easy it is to cast them as the good guys, or the bad guys. Hell, it's even easier to cast them as a complicated being trying to do the right thing but forced to live with the horrid problem of having to drink blood to survive. They're just so much fun.

Actually, I've got an upcoming trilogy contracted with ImaJinn Books that's all about vampires. Well, there are many creatures of the night in my story, but the main ones are vamps. And they're not the good, romantic guys.

The first book is called UNNATURAL and features a heroine who isn't a vampire, but without vamps would cease to exist. In this world vampires are horrible creatures who like to play games, drink lots of blood, and seduce as many humans as they can. They also like to make promises they don't always keep. But Trina's always in the shadows waiting for them.

I can't wait to share more details about UNNATURAL, and as soon as the wheels are turning, I'll be sure to post all about it. You can visit my website to find out more as it becomes available at: http://www.yolandasfetsos.com/

Thanks for reading, and keep those vampires coming. ;)
Yolanda
Posted by Michele Hauf at 2:00 AM

I love me some Lost Boys as well!! I've watched that movie more times than I can count and I never get tired of it. I even introduced it to my 11-year-old. Thanks for stopping by. Your books are definitely something I'd love to read.

Hi Rosie! Thanks! Oh, yeah, The Lost Boys is just one of those movies, isn't it? No matter how many times you watch it, you never get sick of it. I'm looking forward to the day when I can introduce my daughter to it, too. But she's only 9 at the moment.

I enjoyed reading your guest post & am looking forward to finding out more about your books :o)

Hi Sarah! Thanks! I have to say that although I preferred Interview with a Vampire the book, the movie was well done. :)

I agree with you, the mention of vamps gets me smiling.

I, too, loved Lost Boys and try to watch it whenever it's on TV!

Did you create the Faithless book cover or did you work with someone? The cover is so eye catching.

No, I didn't create the Faithless cover. An awesome cover artist from Damnation Books made it for me, and I love it. Her name is Jessica Lucero. She makes some very cool covers. :)