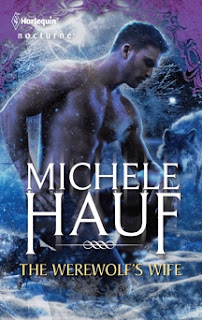 Yes, a bit of tooting my own horn today as I announce THE WEREWOLF'S WIFE is arriving in stores today.  This is a fun combination of a werewolf and witch who combine forces to rescue a kidnapped boy.  Ridge Addison, the hero, appeared previously in HER VAMPIRE HUSBAND.  To read the first chapter, stop by my website!  Also I've started a Pinterest board with some fun pics related to the story.

Alpha wolf Ridge Addison left his wife in Las Vegas, vowing to put their one reckless night of passion behind him and return to his pack. Years later he needs a divorce so he can become pack leader. Yet he's never forgotten the sensuous witch whose life he saved...or the knee-buckling kisses he still craves.
After they parted, Abigail tried banishing Ridge from her memory. Now her heart belongs only to her son. But when the boy is kidnapped, she knows she alone can't save him. Though Abigail's body still aches for Ridge, she's willing to give him his freedom in exchange for his help. But who will shield her heart from the only man she's ever let claim her, body and soul?
Posted by Michele Hauf at 10:46 AM

I read an advance copy of this novel, and it upholds Michele's reputation. It's an excellent book which I will review in my July column. The worldbuilding is as solid as any science fiction writer would do, but the ROMANCE sizzles. Definitely adult fare.