Please give a Halloween growl for Mercy Loomis today, who is talking about bad boys and her latest, SCENT AND SHADOW!  And do comment and let us know who your favorite bad boy is.

One of the many aspects of vampires that attracts us is that bad boy image. It’s the mainstay of much of modern paranormal romance. The dark, brooding figure, the rebel, the tortured soul with the chilling secret.

But what about the really bad boys?

I love me some paranormal romance, don’t get me wrong. But the trend of humanizing the monsters gets to me. Vampires who don’t need to kill. Vampires who can feed solely on animals. Vampires who can walk in daylight. After a certain point, they start resembling super heroes with digestive issues, not monsters.

I love Gothic horror. Dracula, the Wolfman, Dr Jekyll. What Gothic horror loved to explore was id versus ego, the struggle of one human to overcome his or her base, animal instincts. And those instincts and urges are seductive. How much easier life is, those instincts whisper, when you do only what you want to do. Take what you want. Not worry about right or wrong, but only about your own desires. 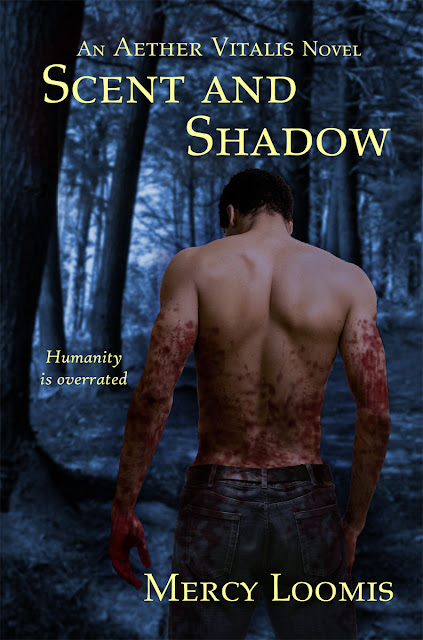 That, in my mind, is the essence of the vampire. A sort of delicious, wanton selfishness.

Not that monsters can’t have friends. Aether Vitalis vampires have to kill, but they don’t have to kill every time they feed. (Well, after the first fifty years or so…) They can form attachments, even fall in love. But in the back of their minds is always the knowledge that they exist to kill and consume humans, that they’ve chosen their own lives above others’.

When someone that ruthless focuses on you as something other than a meal, it can be pretty hard to say no. Vampires can be very persuasive…

So tell me, Who is your favorite paranormal bad boy?

Below is the blurb for my novel Scent and Shadow. From now through Halloween you can download a copy of the novel free at Smashwords with coupon code .

Madison, WI. 1999. When vampire Gabriel Chapel decides to take on a fledgling, he knows not just anyone will do. Newly-turned vampires kill at least one person a night for the first decade or so—a fate most humans could never adjust to.

For college student Amanda Bairns, nothing is more important than finally taking control of her life. But when Gabriel forces her to drink his blood, Amanda is pulled deeper and deeper into a supernatural underworld she never knew existed, where mages have their fingers in local government, shapeshifting faeries control infrastructure, and aether-rich ley lines attract a host of creatures welcome and unwelcome.

With the vampire’s blood coaxing her to become a murderer, Amanda has four weeks to discover which means more: her freedom and humanity, or the power Gabriel offers. But neither Gabriel nor Amanda realize Amanda is a pawn in a much bigger contest—one which could have lethal consequences not only for the two of them, but for the entire city. Contains explicit sex.

About the Author:
Mercy Loomis grew up in a haunted house, and has had quite enough of ghosts for one lifetime, thank you. Though she now lives in a 150-year-old house, it is remarkably ghost-free. (That, or they’re staying on the down-low. She doesn’t care which.)

Mercy finished writing her first vampire novel when she was in middle school, and hasn’t stopped writing about them since. She loves stories about the paranormal because monsters are scary, but less scary than real people. Or at least less depressing. See what she's up to and find links to her other work at www.mercyloomis.com.

Sounds like a great read. But what's the coupon code?

To make up for my idiocy, I'll also make my m/m vampire novella Demon's Asylum free through Halloween as well. Coupon code NF58H. (Ha, see, I added it this time.)

Zsadist from the BDB series