A Convention just for Supernatural Fans 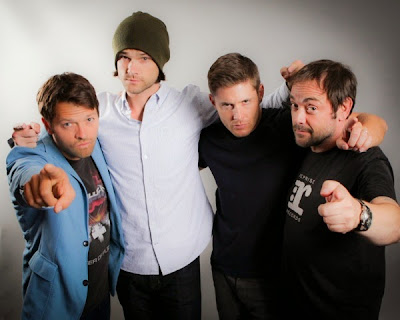 Coming to Phoenix in February!

The "Salute to Supernatural" is a Creation Entertainment Convention,  which looks a bit different from your typical comicon. They focus on one fandom for each event, and your ticket guarantees you a seat in the hall when your guest is speaking. This is unlike Phoenix Comicon, where your ticket gets you in the door, but you need to get in line or make sure to be in a ballroom early if you want to hear a particular guest speak. That of course, can lead to disappointment for people who really wanted to hear one specific guest, but didn't show up fast enough to get in the door. So, that is the big upside here, it seems.

One downside that I can see is that right now, their website only sells "Gold" memberships which cost $699. That is crazy. They say more levels will be opening up soon so stay tuned, but at the moment, I have no idea what to expect for general admission pricing. It could be affordable, could not be. We'll have to wait and see. I have never been to a Creation event, so I can't give you any "past experience tips."

But it looks like a lot of fun and because it is just focused on Supernatural, you know you will get exactly what you came to see. That's kind of nifty. Oh and by the way, there are other Creation cons in the country, and one is a Vampire Diaries event!

Not going to be in the Phoenix area? Or want to go to one of the other themed cons?
Here's a list of Creation Conventions throughout the country:
Atlanta,GA
Mar. 6-8, 2015 - The Vampire Diaries Official Convention

If this was affordable I would absolutely go!