In BLOOD WILL TELL (2001), Jean Lorrah, best known for the Sime-Gen series in collaboration with Jacqueline Lichtenberg, creates a balanced blend of police procedural, romance, and innovative science fiction that displaces vampires from their position on the top of the food chain. The protagonist, small-town police detective Brandy Mather, engages the reader from the moment she's introduced in the opening paragraph. Brandy's entanglement in weirdness begins with the discovery of the body of an incredibly old man at the local college, dead from unknown causes, wearing the clothes and identification of a much younger college professor. In between investigating this mystery and keeping up with the routine crimes of a small Kentucky community, Brandy copes with her widowed mother, clashes with a corrupt judge, and falls in love with college computer specialist Dan Martin, whose past holds its own secrets. Given the advance knowledge that BLOOD WILL TELL is a vampire novel, we might expect that the dead man was killed by a vampire. Instead, it appears that he was one himself. The charming, intelligent Dan turns out to be a type of vampire different from any you may have encountered. He claims to belong to a naturally evolved species, but could there be more to his race than even he knows? 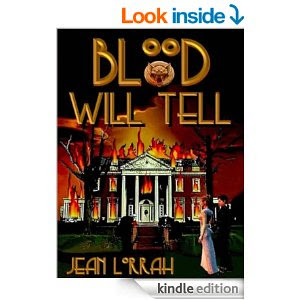 The unfolding plot confounds the reader's expectations at every turn, yet always logically and satisfyingly. Everything we thought we knew about vampires comes into question, with an ingenious explanation for the wide variety of different vampire traits found in folklore traditions. Dan has hypnotic powers, extreme longevity, rapid healing, and preternatural strength. He's stronger by night but can function in the daytime. Blood serves as a "supplement" rather than food for him; he needs it to live but requires only a small amount per month. The murder mystery's solution, the villain's nature and purpose, and Brandy and Dan's ultimate fate work out in a way few readers will anticipate.

As a woman detective, Brandy displays strength, intelligence, and resourcefulness that remind me of Clarice Starling in THE SILENCE OF THE LAMBS. Though Dan initially appears to be the perfect lover, too good to be true, he, too, is a three-dimensional, sympathetic character with credible flaws. Their relationship grows into a solid vampire romance with all the contemporary vampire's erotic allure but without larger-than-life emotional extravagance. Sharing blood grants them a powerful empathic bond, yet they still have to negotiate mundane adjustments of schedules and daily habits such as every new couple faces. I especially like the novel's view behind the scenes of a small-town police department. (Lorrah draws on the setting of the college town in Kentucky where she herself taught for many years.) Serving a small community with a limited staff, Brandy's department has to assign her to a variety of tasks, quite different from the specialization portrayed on TV cop shows. I thoroughly enjoyed the results of Jean Lorrah's meticulous research. Even the most bizarre forensic element in the story is, as she notes in an afterword, based on fact. Did you know elderly people can lose their fingerprints? I didn't. BLOOD WILL TELL deserves comparison with the vampire detective fiction of Tanya Huff, Lee Killough, and P. N. Elrod.