Published in Japan in 1983 and in the U.S. in 2005, VAMPIRE HUNTER D, by Hideyuki Kikuchi, launched a long series of novels, of which over twenty have been translated into English so far. Kikuchi openly celebrates his inspiration for the series, the classic Hammer vampire movies, especially HORROR OF DRACULA. The villain of VAMPIRE HUNTER D is even named after Christopher Lee. The story takes place in the post-apocalyptic world of 12,090 A.D. In the past, the Nobility—vampires—ruled over the human population. Nobles enforced their authority with futuristic technology. Since the fall of the Nobility, humanity has lived amid the ruins of their civilization with the remnants of their fantastic machines and genetically engineered beasts. Vampires haven't gone completely extinct, though, and still inspire fear in less settled parts of the world. On the frontier, human communities struggle to survive in a monster-haunted wilderness. 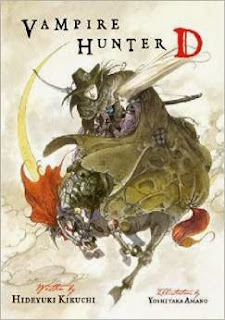 In the setting of the first novel, a cross between the typical frontier town in a Western movie and the besieged village of a Gothic horror story, an orphaned young woman, Doris Lang, runs the family ranch with the help of her kid brother, Dan. No helpless damsel in distress, she wields a whip against monsters and stands up against the harassment of the mayor's son, who tries to use his wealth and status to take possession of her. She can't save herself, though, when the local Noble, Count Magnus Lee, bites her. It's only a matter of time before the vampire lord claims her as his bride. She turns to the archetypal wandering fighter, a young-looking Hunter known only as D. Hired to kill Count Lee for her, D establishes something of a bond with Doris and Dan, who idolizes the Hunter. D infiltrates the Count's castle, where he confronts a monstrous version of Dracula's brides, three vampire women fused into a hydra-like creature with three heads on one body. He also meets Larmica, the Count's daughter, a more ambiguous, even potentially sympathetic incarnation of vampirism. D himself is a dhampir, a vampire-human hybrid. Throughout the series it's hinted that his father was the "Sacred Ancestor"—in other words, D possesses supernatural gifts, even beyond the typical dhampir, because he was begotten by Dracula. D has another unique feature, a symbiotic or parasitic organism manifesting as a face in the palm of his left hand. This creature, whose nature and origin are never explained (not in the translated volumes of the series so far, at least), displays extraordinary powers that augment D's invincibility. The left hand (which can detach itself and act independently if necessary) doesn't seem to think much of D; it constantly argues with the Hunter in a grumpy, cynical tone.

This book reads as a cross-genre mix of horror story, Western adventure, and post-apocalyptic science fiction, with an element of romance. Doris quickly becomes infatuated with D, who seems genuinely drawn to her. He also appears to care for young Dan. Yet at the conclusion of the story, as we'd expect of a wandering fighter in a Western, he rides off into the wilderness alone on his cybernetic horse. One reviewer describes D as a tragic figure of "a man dedicated to fighting darkness but unable to express love." It's hard to judge the accuracy of this characterization, because the omniscient narrator never gives us much access to D's thoughts. Throughout the series, we're constantly told how "gorgeous" the Hunter is and how everyone finds him fascinating on sight, but we don't know how he feels about this reaction. He remains an enigma. Two animated films based on this series have been released, VAMPIRE HUNTER D and VAMPIRE HUNTER D: BLOODLUST. While both are worth viewing, I like the art of the second movie better than the first.