DINNER AT DEVIANT'S PALACE (1985), by Tim Powers, is even weirder than his epic historical novel THE STRESS OF HER REGARD (and considering the silicon-based vampire species in that novel, that's saying something). He sets DINNER... in a post-apocalyptic Los Angeles, a generation after nuclear bombs devastated civilization. It comes across as a dark, dangerous place, with futuristic slang to set the tone. As the main medium of exchange, the economy bases its currency on a type of high-proof brandy. Poisonous levels of radiation linger in some areas. Mutants, marauders, and "trashmen" (makeshift cyborgs assembled from miscellaneous scraps) prowl the blasted wastelands. Deranged women called "pocalocas" dance in the streets of the city. The action centers around a private club, Deviant's Palace, notorious for drugs and perversions, and a mysterious cult run by a man named Norton Jaybush. Middle-aged, hard-boiled musician Greg Rivas, a retired "redemption" agent, gets hired by the wealthy father of his first girlfriend, Urania, to rescue her from Jaybush and his "Jaybirds." As for vampirism, the novel includes energy draining, a reddish-brown powdered drug called Blood (derived from guess what), and translucent, floating, bloodsucking monsters something like balloons or jellyfish, called "hemogoblins," which take on vaguely human shape when fully fed. 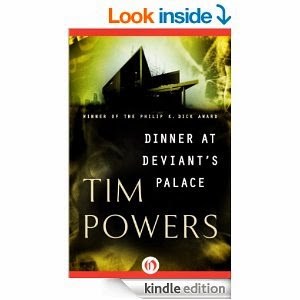 In search of Urania, Rivas tries to go undercover in Jaybush's cult. He's sidetracked by several harrowing encounters but finally makes his way to the Holy City. Fortunately, he knows ways to accept the "sacrament," a literally electrifying touch that engenders an experience labeled "merging with the Lord," without suffering its full effects. Some worshipers who endure this process too many times become the "far-gone," their individuality irretrievably lost. Subjected to an accidental overdose of Blood at one point, Rivas links with the mind of a far-gone and gets flooded by the memories of Jaybush himself. Rivas ultimately discovers the connections among Deviant's Palace, the cult, and Blood and learns the origin and nature of hemogoblins and the truth about Jaybush. It's not too much of a spoiler to reveal that the "Lord," despite his outward appearance, isn't remotely human; he's one of the most repellent alien vampires I've ever encountered. At the climactic dinner with Jaybush and Urania, Rivas manages to render the villain powerless without being able to destroy him. Rivas succeeds in his quest but doesn't win a happy ending for himself. Instead, he takes on a lifelong burden.

DINNER AT DEVIANT'S PALACE has one drawback as an SF horror novel. In its surrealistic future California, where everything is strange and threats lurk almost everywhere, it's hard to tell we should accept as "normal" for the setting and what's paranormal. Everything is scary—and as madly creative as you'd expect from Tim Powers.