SINGLE WHITE VAMPIRE (2003), the earliest published (but not the first written) novel in Lynsay Sands's Argeneau family series, may not quite count as "vintage," since the series is still going strong, with one or two new books every year. SINGLE WHITE VAMPIRE is over ten years old, however, and deserves the attention of paranormal romance fans who might have missed it. It's the funniest vampire romantic comedy I've ever read.

Reclusive Lucien Argeneau has become famous for his bestselling paranormal romance "fiction"—actually straightforward narratives derived from his family's history. Kate Leever, a new romance editor for his publisher, faces the challenge of persuading the author to participate in publicity for his work. He has no interest in book tours or anything else that would require leaving home. When he doesn't answer her letters (in fact, he hasn't even opened his mail in weeks), Kate arrives at his house, luggage in hand. Disgruntled by her intrusion, Lucien can't get rid of her despite his best efforts. "In his experience, people were a bother and never failed to bring chaos with them. Women especially." Kate becomes acquainted with his family, including his matchmaking mother, Marguerite. Naturally mutual attraction seizes them, regardless of Kate's puzzlement at Lucien's odd behavior and his resistance to getting involved with any woman. Eventually she maneuvers him into attending the Romantic Times convention, and hilarity ensues. The scenes at the con will be especially entertaining for writers.

Humor, sensual love scenes, and a touch of suspense keep the novel un-put-downable. Of course in the end Lucien acknowledges Kate as his life mate. This story provides a smooth introduction to the premise of the series—that the Argeneau clan originated in lost Atlantis, where they perfected submicroscopic "nanos" that circulate in the bloodstream to keep their hosts perfectly healthy, fast-healing, eternally youthful, and immortal. They can also read and control minds (but not the minds of their life mates). Because the nanos consume blood in performing their functions, immortals—the label they prefer to "vampires"—have to ingest blood frequently. They avoid unnecessary exposure to sunlight because the nanos work overtime to repair sun damage, requiring the host to drink more blood than usual. In the modern era, they supply their needs with bagged blood, never drinking from live victims except in emergencies. They can also eat ordinary food and engage in normal sex, which is especially intense between life mates. They deliberately keep their numbers low with restrictions on child-bearing and transformation of others into immortals.

My only minor complaint about these books is the virtually total absence of the link between blood-sharing and sexuality that, for me, forms a major appeal of the vampire archetype. Often the need for blood remains so much a routine part of the background that the Argeneau family might as well be immortals from the HIGHLANDER universe. But it's one of my favorite vampire series anyway.

It's interesting to contrast the current covers of the book with the original. Here are the two presently displayed on Amazon, both of them making the story look darker than it really is: 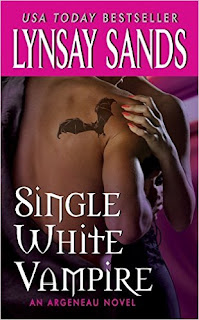 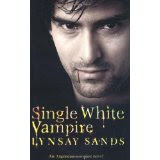 This third image is the cover of the original paperback from 2003, light and fluffy, emphasizing the romantic comedy dimension of the story. Personally, I like this one best. The recent covers strike me as too generic as well as too dark; they don't offer anything to distinguish this book from any other vampire romance on the shelves.

The 2003 blurb matches the tone of the cover, playing up the comedy as well as making Lucien sound like a traditional vampire rather than an SF creature. It even mentions "religious symbols," which of course have no effect on Argeneau immortals. In short, it appears that the publisher wasn't sure what to do with this innovative approach to vampires and tried to make the first book look and sound as much as possible like something readers would find familiar.