If you haven't read any of Susan Squires' "Companion" series, try the first book, SACRAMENT (2002). You can find a complete list of the Companion novels and novellas here:

This novel combines Regency fiction with Gothic horror, two genres that can be blended effectively, as illustrated by Jane Austen's NORTHANGER ABBEY. Like a typical Regency romance, SACRAMENT features a plucky heroine in trouble, an egoistic rival beauty, an arrogant but magnetic hero, and the select society of the ton. On the Gothic side, it includes vampirism, archaeology, forbidden medical experimentation, imprisonment, torture, sinister monks, and ancient secrets. The action ranges over a wide variety of settings, such as London, Bath, Vienna, and the exotic remoteness of the Carpathian Mountains. Sarah, alone in the world aside from a would-be fiance for whom she has only lukewarm feelings, faces the risk of losing her family estate to enigmatic aristocrat Julien Davinoff. Her desperate attempt to save her inheritance leads to unexpected revelations about why Davinoff wants her land; a vampire of extraordinary age, he uses the tunnels beneath the ruins on Sarah's estate as a cache for the priceless souvenirs of his very long life. Sarah learns the truth about Davinoff when she becomes entangled in her alleged friend Corina's campaign to win his love. When Corina's seduction fails, she imprisons him in her cellar and forcibly addicts him to laudanum. Sarah rescues him, although she suspects him of perpetrating a series of vampiric murders. She uses her up-to-date knowledge of medicine (gleaned from her physician suitor) to break the addiction and uncovers his secret. Realistically, she gets her image of vampires from Dr. John Polidori's scandalous tale, "The Vampyre." She feeds Davinoff her blood to save his life anyway, and he reveals to her the true, non-supernatural origin of his vampirism. His yearning to make her his eternal mate by transforming her yields to his nobler impulses, and he flees from the temptation. Sequestered in a secret vampire monastery in the Carpathians, he takes the Vow that will separate him forever from human society. Sarah pursues him into the wilds of Eastern Europe, where she fights for her love in a confrontation with the eldest of all vampires. 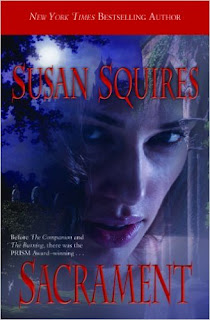 SACRAMENT offers an unusual variation on vampirism as an infection. The Companion is a symbiotic organism inhabiting a well on the grounds of the monastery. A parasite that lives on red blood cells, it bestows long life, regeneration, and rapid healing on its host. The host can also exercise certain extraordinary powers—e.g. mental influence, limited teleportation—by focusing the energy provided by the Companion. A vampire needs to ingest blood to nourish the Companion and becomes sensitive to (but not destroyed by) sunlight. A prospective vampire can be transformed by drinking the blood of an existing one—or by drinking the infected water from the well, but then he or she must have vampire blood in order to change rather than die. Squires convincingly frames this information in terms plausible for the characters' understanding in the context of nineteenth-century science. The reader can sympathize with Davinoff's conflict between his love for Sarah and his loyalty to the rigid laws that, he believes, provide the only ethical way of life for his kind. Sarah is a strong heroine who grows in self-knowledge and self-confidence throughout the story, until she attains the capacity to ignore the strictures of her society when they stand in the way of winning love. Davinoff does have an annoying tendency to fall into the "eternally cursed" mindset of the all-too-typical brooding vampires of many romances, but he gets over it. SACRAMENT and the other works in this series offer fans a fresh angle on the familiar tropes of the genre.