If you're seeking a picture book for Goth-minded, vampire-loving kids, try HIPIRA (2002 in Japan; English edition 2005). The story begins, "My name is Hipira. The truth is, I'm a vampire! Everybody had better be really afraid of me!" As you might expect from a character in a children's book, however, he turns out to be more friendly than frightening. 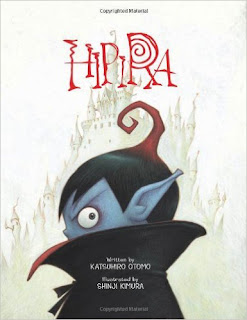 Hipira lives in Salta, a town inhabited solely by vampires, where it's always night. As he mentions, it's a great place for kids who love to stay up late. The book includes scary images that could develop into "nightmare fuel" if given free rein, but humor dilutes any traces of fear, and there's always a happy ending (in a sort of Addams-family-ish sense). HIPIRA comprises several short stories. In "The Tale of Soul," Hipira sneaks into the castle of the mysterious Town Elder, a vampire wizard constructing a "vortex of spirits" out of captured human souls. (Hence the potential for nightmare fuel, but the text quickly glosses over this concept.) The Elder's project of conjuring sprites from the vortex yields one small creature, who calls himself Soul and becomes Hipira's best friend. In "Cock-A-Doodle-Doo!" Hipira scares his relatives and neighbors by imitating a rooster—a terrifying sound in a city where morning is never supposed to come. "The Frog Prince" involves dark, creepy woods, a dried-up river, and a giant toad. In "School Is Fun," Hipira learns about the illustrious ancestor of his people, Count Dracula, and Soul plays a prank. "A New Friend" frightens the citizens of Salta with a meteorite that damages the high wall around the town, letting in a sunbeam and allowing the vampire community to be overrun with sharp-toothed, goblin-like imps.

This book doesn't include any blood-drinking but focuses on the vampires' nocturnal lifestyle and other quirky nonhuman traits. The style of the art is both humorous and grotesque, yet the backgrounds have a strange beauty. In the color scheme, various shades of blue dominate, conveying an impression of perpetual twilight. Salta comes across as a Gothic landscape with an occasional touch of steampunk. Yet there's a bit of a fairy-tale atmosphere, too. HIPIRA blends these elements in a unique style you're not likely to find in a children's book written in North America.