Nicholas Gale, the nonhuman hero of Susan Krinard's PRINCE OF DREAMS (1995), is a member of a different species and a psychic vampire, feeding on the energy of dreams. His extrasensory power makes possible a deeply erotic intimacy with the heroine, psychologist Diana Ransom. Fearful of draining her energy to a harmful or fatal degree, he carefully ensures that the dream embraces they share have only a positive effect on her. In addition to the care he takes with his donors, only "skimming" their life-force and granting them consolation or pleasure in dreams, he's a philanthropist, a patron of the arts. This novel offers an early example of the now-familiar trope of a pair of vampire brothers, one good and one evil. Nicholas and his brother, Adrian, are the last of their kind. A totally destructive energy-vampire, Adrian disdains Nicholas's scruples about repaying human donors with comfort and peace. Because Adrian has no compunctions about draining his victims to death, his lifestyle, as with many similarly ruthless vampires in fiction, gives him an advantage in power over Nicholas. 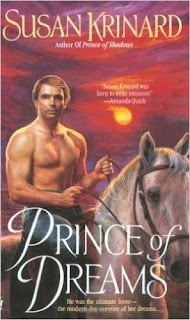 In the prologue, set in 1891, Nicholas clashes with Adrian over Sarah, a woman he cared for, whom Adrian destroyed by completely draining her through sex (the reason why Nicholas confines his intimacy with his donors to their dreams). Nicholas chains and imprisons his brother in a cave in California. In the present day, Diana has recurring nightmares about the death of her sister, Clare, involving a sinister, vampire-like figure. Keely, her young cousin, an artist, disappears. In searching for her, Diana becomes acquainted with Nicholas, Keely's anonymous patron. Eventually, Nicholas discovers that Adrian has escaped. The "evil"—or at least deeply flawed—brother preyed on Clare and Keely and pursues Diana because they're descendants of Sarah. The remote possibility that Sarah's bloodline might hold a chance of mortality for their kind appeals to Nicholas and enrages Adrian. Nicholas is a rare example of an other-species vampire who wants to become human. Together, Diana and Nicholas become so powerful they can enter a dream world together and even pull an unwilling Adrian in with them.

Coincidentally, PRINCE OF DREAMS came out around the same time as Jasmine Cresswell's PRINCE OF THE NIGHT (1995) and Christine Feehan's DARK PRINCE (1999), all three titles framing vampires as aristocrats. Because the male belongs to a superior species (emphasized by the word "Prince"), the pairing conforms to the traditional relationship model of many older romances—dominant, protective male and protected, rescued female. In each case, the balance of power is restored because the vampire needs his human beloved for more than nourishment. In Diana, Krinard's Nicholas finds love, an end to loneliness, and deliverance from the pain of being the last of his race. She also delivers Nicholas from the guilt he suffers because of his need to drain energy from unsuspecting mortals. He fears his kind have become almost extinct because they "were never meant to live on this earth" and were an "affront against nature." Diana reassures him that his people have repaid humanity by using dreams to inspire "great artists and thinkers" through the ages.

By the way, few prospective readers would recognize this novel as a vampire romance from a glance at the original cover (shown above), with a half-naked man on horseback in the moonlight, even though this illustration does reflect the setting of the prologue.