The Mark of the Moderately Vicious Vampire

The reader can instantly guess from the title of THE MARK OF THE MODERATELY VICIOUS VAMPIRE (1992), by Lionel Fenn, that it's a humorous novel. It hits all the notes of classic vampire fiction and film, satirizing features of Stoker's DRACULA, Universal and Hammer horror movies, and 'SALEM'S LOT. Count Lamar de la von Zaguar arrives on a dark and stormy night in the seacoast village of Assyria, Maine, with two goals: (1) To find a woman to become his immortal mate, and (2) to take over the town as a base for wider conquest by his potential undead minions. An anonymous letter summons the nominal hero, actor and Scottish baron Kent Montana (who stars in a series of other novels as well, none of which I've read), to save the community, his occasional summertime "home away from home." 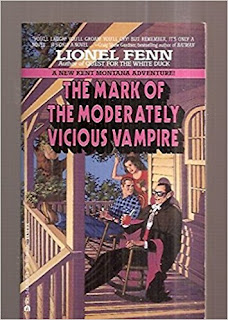 Count Lamar's coffin washes ashore in the midst of an unnatural storm, not in a derelict sailing ship like the more illustrious Count, but in a purple dinghy. The vampire breaks off a fang in the rough landing, causing him to leave one puncture mark on his victims' necks rather than two. After settling in the sinister, abandoned mansion that overlooks the village, he recruits an insect-eating minion (who has trouble adjusting to his new diet), transforms the obligatory trio of voluptuous brides, and hires a greedy real estate agent to buy up all the property in town for the "Master." Bloodless corpses, mysterious fog, hints dropped by a grizzled, retired pirate (who carries a stuffed vulture on his shoulder instead of a parrot), and random bat and wolf sightings impel Kent Montana to consider the possibility of vampirism. Townspeople inundate him with cryptic remarks about the supernatural menace but remain stingy with hard facts. A local couple repeatedly implores him to kill their deceased daughter, one of the vampire's victims. To hunt down the bloodsucker, Kent joins forces with a former girlfriend, a clergyman, and a professor who travels the world, along with his beautiful assistant, using his occult expertise to destroy monsters. The minister proves to be far from a courageous holy warrior but does his best to "save the soul" of a woman at risk of being seduced by the Count. The professor shares alleged esoteric vampire-hunting lore, all of which turns out to consist of factoids familiar to everybody from horror movies. The group wanders cluelessly around the mansion, arguing about whether the coffin will be hidden in the most obvious place or the least obvious place. Naturally, in defiance of conventional wisdom, they split up. At the climax, a torch-bearing, pitchfork-waving mob storms the villain's lair. Meanwhile, Kent, confronting the vampire face-to-face, resorts to a technique from a Christopher Lee film that any fan will recognize.

Because THE MARK OF THE MODERATELY VICIOUS VAMPIRE is a parody, it doesn't invite us to identify with the characters or particularly care about their fates. It's a fun story that exists mainly to allow the alert reader to spot the vampire cliches and other stray pop culture references peppered throughout the text.

After study a few of the blog posts in your web site now, and I truly like your way of blogging. I bookmarked it to my bookmark website list and shall be checking back soon. Pls take a look at my website as effectively and let me know what you think. casino play