To begin with an admission up front: ROD SERLING'S TRIPLE W (1963) is not a vampire anthology. As indicated by the subtitle, it collects tales of "Witches, Warlocks, and Werewolves." Because this is an outstanding vintage horror anthology, however, I couldn't resist telling you about it. This was one of the first paperbacks I bought in my teens, while discovering horror and fantasy, and it introduced me to several classic stories. Copies are available on Amazon. 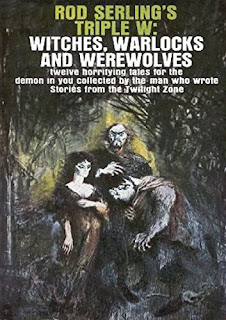 The two best-known classics in the anthology are Hawthorne's "Young Goodman Brown" (witches, warlocks, and Satan) and Kipling's "The Mark of the Beast" (lycanthropy). "The Story of Sidi Nonman" retells a Middle Eastern legend of a man finding himself married to a witch who sneaks out by night to feast with ghouls. Some of the more recent works: "Hatchery of Dreams," by the great Fritz Leiber, narrates the adventure of proper Bostonian Giles Wardwell when he has to rescue his wife, whom he has just discovered to be a witch, from a modern witch-hunter. In "The Amulet," by Gordon R. Dickson, a sleazy and sometimes violent drifter wanders into the Ozark back country and falls afoul of a pair of witches. The rich but discontented protagonist of "Blind Alley," by Malcolm Jameson, which was filmed under a different title as a TWILIGHT ZONE episode, makes a demonic bargain for a time-travel journey to his youthful home in the early twentieth century, where he plans to enjoy the challenge of building a fortune all over again; of course, the fulfillment of his wish doesn't turn out the way he expects. One of my favorites, a unique and often-reprinted variation on the werewolf, Bruce Elliott's "Wolves Don't Cry," is told from the viewpoint of a zoo wolf who wakes up one morning as a man; he has to learn to be human, a process he doesn't enjoy at all.

The book does, however, contain one vampire story, although not marked as such. "And Not Quite Human," by Joe L. Hensley, is probably meant to fall into the "warlock" category. In the distant future, a race of human-like aliens attacks Earth and clears the planet of its inhabitants to prepare it for colonization. Surprisingly, forty-four Terrans survive the attack, and as the story begins, they are prisoners on the alien ship. They lurk in the shadows of their cells and refuse to eat. Members of the ship's crew suffer nightmares and hallucinations, succumbing to irrational fears supposedly long since eliminated from their species, while the prisoners inexplicably grow stronger. At the end, an old man with sharp canine teeth congratulates the captain on the success of the attack: "Nothing human could have lived through it—nothing human did. Some of us were deep underground, where they'd buried us long ago—the stakes through our hearts—they knew how to deal with us. But your fire burned the stakes away." Deliciously creepy!

This treasury of haunting tales ends with an essay on "Witch Trials and the Law," by Charles Mackay.

Are you tired of being human, having talented brain turning to a vampire in a good posture in ten minutes, Do you want to have power and influence over others, To be charming and desirable, To have wealth, health, without delaying in a good human posture and becoming an immortal? If yes, these your chance. It's a world of vampire where life get easier,We have made so many persons vampires and have turned them rich, You will assured long life and prosperity, You shall be made to be very sensitive to mental alertness, Stronger and also very fast, You will not be restricted to walking at night only even at the very middle of broad day light you will be made to walk, This is an opportunity to have the human vampire virus to perform in a good posture. If you are interested contact us on Vampirelord7878@gmail.com
Or Add up on Whats-app +233248104710

I'm giving a testimony on how me and my fiance became a vampire. This was how i and my fiance became Vampire, I was browsing the internet searching on how i could be transformed. When i came across the email of a man named Lord Mark. who was a VAMPIRE so I told him that I and my fiance has always dreamed of becoming a VAMPIRES so he asked me my name, country, State, address, photo, etc. and asked me to contact the market of spells for the Hindu materials required for our transformation. So I did and he said that a vampire will be assigned to guide us and direct us on how the items are to be used. After five days I and my fiance was totally a vampire. if you are interested in becoming a vampire, contact him for more information on how you could also be transformed. Email: Vampirelord7878@gmail.com

Hi Everyone,This was how me and my Boyfriend became VAMPIRES. I got a guy from the internet called Mr. Thomas who was a VAMPIRE so i told him that me and my boyfriend would love to become a VAMPIRES so he asked me of my Name ,Country, Age ,State , address and in the next 3 days i got the blood sample through the DHL which me and my boyfriend took in the blood into our body and in the next 30 minutes we turned into a VAMPIRE so if you are interested in becoming a VAMPIRE. First: Vampires is not at all like in the movies or books, Sure. I understand. You are young; you have the whole world open to you. You can be anything that you choose if you apply yourself and try hard to work toward that goal. But being a vampire is not what it seems like. It’s a life full of good, and amazing things. We are as human as you are.. It’s not what you are that counts, but how you choose to be. Do you want a life full of interesting things? Do you want to have power and influence over others? To be charming and desirable? To have wealth, health, and longevity? contact the vampires creed today via email: Richvampirekindom@gmail.com

Become a vampire now and enjoy all the supernatural abilities. Join Gumbala of the 76th,practice transformation and shapeshifting. Contact Gumbala via email ( gumbalavampirehome@gmail.com )
Do you want to be a vampire, are you tired of being human? A world of vampire where life get easier,we have made so many persons vampires and have turned them rich,you will assured long life and prosperity,you shall be made to be very sensitive to mental alertness, if you are interested contact Gumbala via ( gumbalavampirehome@gmail.com )

Vampires is not at all like in the movies or books. Sure, I understand. You are young you have the whole world open to you. You can be anything that you choose if you apply yourself and try hard to work toward that goal. But being a Vampire is not what it seems like. It’s a life full of good, and amazing things. We are as human as you are.. It’s not what you are that counts, But how you choose to be. Do you want a life full of interesting things? Do you want to have power and influence over others? To be charming and desirable? To have wealth, health, and longevity, I can help you solve any problem you are having
(1) If you want your ex back.
(2) If you want to stop having bad dreams.
(3) You want to be promoted in your office.
(4) You want women/men to run after you.
(5) If you want a child.
(6) You want to be rich.
(7) You want to tie your husband/wife to be yours forever.
(8) If you need financial assistance.
(9) If you want to stop your divorce.
(10 If you want to divorce your husband.
(11) If you want your wishes to be granted.
contact the Vampires Lord on his Email: Richvampirekindom@gmail.com

Jesus, have mercy on her soul...

What an odd set of comments you've gotten on this review.

I just finished reading the book, which is excellent more or less top to bottom. I think my favorite in the collection was "The Chestnut Beads" by Jane Roberts, but a few of the others give it a run for its money.