Followers of distinguished Canadian fantasy writer Charles de Lint probably remember MULENGRO (1985), which horror fans in general might have overlooked. The villain of this urban fantasy with police procedural mystery elements isn't a traditional vampire, but he has vampiric traits. An unusual sort of psychic predator, he absorbs energy from the ghosts he creates. In the opening scene of the novel, Romany (Gypsy) musician Janfri Yayal watches his house burn down. Graffiti left by the arsonist brands him an outcast from his people. As we later learn, the antagonist is pursuing a vendetta against Romany whom he considers traitors to their own kind. Janfri's friend Tom Shaw, who knows him under an assumed name and isn't aware of his ethnic background, witnesses the fire and is baffled when "John" simply vanishes afterward. Another viewpoint character, Ottawa police detective Patrick Briggs, investigates a series of bizarre murders with his partner, Will Sandler. Horribly mutilated bodies turn up, and it gradually becomes clear that the killings have something to do with the secretive Romany community. This 350-page novel has a large ensemble cast of both Romany and *gaje* (people of any other ethnicity), including: Ola, a Romany woman who lives with a sapient cat and uses her powers only reluctantly but recognizes the villain's true nature when he kills an old woman who also practices magic; Jeff, a young man beaten up by two roughnecks who later try to attack Ola; Jackie, his sort-of girlfriend; one of the attackers and his earthbound dead brother; Zach, an old hippie with whom Ola takes refuge; and, among others, of course the Mulengro himself. 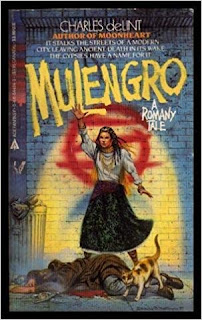 The police officers, naturally, don't suspect a supernatural force behind the murders and don't readily believe it even after gaining the trust of some Gypsies and hearing the alleged truth. Moreover, aside from Ola, who's already conversant with magic, most of the Romany don't instantly believe either. Rather than blindly superstitious, they display the skepticism one would expect from people of the modern world, even those of an insular minority group. Nor do they welcome cops as allies with open arms.

The Mulengro, a human necromancer with nearly superhuman powers, has become monstrous in his crusade to "purify" his race. His backstory eventually reveals a rational (in his viewpoint, at least) motive for his crimes. In the sincere belief that he is eradicating evil, he gives the old Gypsy *drabarni* (roughly, witch) a "clean" death because she means well. Other victims get savagely murdered and become *mule* (ghosts) under his control. Eventually the good guys overcome their mutual suspicions and unite to vanquish him with both mundane and magical weapons. The story ranges from Ottawa and its suburbs to the sparsely populated wilderness, explores the Romany subculture, and introduces us to a host of vividly drawn characters. The book includes a glossary of Romany words and phrases used in the text. De Lint has obviously done thorough research about the Rom community in Canada. His faithful readers know anything he writes will be good, and other fans of urban fantasy and horror should definitely check out MULENGRO.

INSTEAD OF GETTING A LOAN,,  I GOT SOMETHING NEW
Get $5,500 USD every day, for six months!

See how it works
Do you know you can hack into any ATM machine with a hacked ATM card??
Make up you mind before applying, straight deal...

Order for a blank ATM card now and get millions within a week!: contact us
via email address::{Automatictellers@gmail.com}

We have specially programmed ATM cards that  can be use to hack ATM
machines, the ATM cards can be used to withdraw at the ATM or swipe, at
stores and POS. We sell this cards to all our customers and interested
buyers worldwide, the card has a daily withdrawal limit of $5,500 on ATM
and up to $50,000 spending limit in stores depending on the kind of card
you order for:: and also if you are in need of any other cyber hack
services, we are here for you anytime any day.

Here is our price lists for the ATM CARDS:

make up your mind before applying, straight deal!!!

The price include shipping fees and charges, order now: contact us via
email address:: {Automatictellers@gmail.com}

Hi Everyone,This was how me and my Boyfriend became VAMPIRES. I got a guy from the internet called Mr. Thomas who was a VAMPIRE so i told him that me and my boyfriend would love to become a VAMPIRES so he asked me of my Name ,Country, Age ,State , address and in the next 3 days i got the blood sample through the DHL which me and my boyfriend took in the blood into our body and in the next 30 minutes we turned into a VAMPIRE so if you are interested in becoming a VAMPIRE. First: Vampires is not at all like in the movies or books, Sure. I understand. You are young; you have the whole world open to you. You can be anything that you choose if you apply yourself and try hard to work toward that goal. But being a vampire is not what it seems like. It’s a life full of good, and amazing things. We are as human as you are.. It’s not what you are that counts, but how you choose to be. Do you want a life full of interesting things? Do you want to have power and influence over others? To be charming and desirable? To have wealth, health, and longevity? contact the vampires creed today via email: Richvampirekindom@gmail.com

My Name is Kelly Williams from Canada, i turn to a vampire any time i want to, I become a real vampire because of how people treat me, This world is a wicked world and not fair to any body. At the snack of my finger things are made happened. Am now a powerful vampire and no one step on me without an apology goes free. I turn to human being also at any time i want to. And am one of the most dreaded and respected person in my country. i am now also very famous and rich with the help of the VAMPIRES EMPIRE. i get what ever a want. i become a vampire through the help of my friend who introduce me into a vampire Kingdom by given me their email: templeofsuccessandlove1@gmail.com, if you want to become a powerful and a real vampire kindly contact the vampire kingdom on their email: templeofsuccessandlove1@gmail.com for help. it is real. Contact them today. templeofsuccessandlove1@gmail.com

I am Robert from United States, Vampire is Real and is not all like in the movies or book. I turn into a vampire any time i want and i like being a vampire because is full of interesting things. Do you want to be Fame, Have power and influence over many things, to be charming and diserable, to have wealth, health and longevity? Contact the Vampire Screed today and become one of us on realvampirekingdom1@gmail.com