V Is for Vampire

Renowned vampire film authority David J. Skal published an alphabetical guide to vampire-related movies, books, TV, and other media, V IS FOR VAMPIRE (1996). Despite the subtitle, THE A-Z GUIDE TO EVERYTHING UNDEAD, this book isn't really an encyclopedia. For that, you want J. Gordon Melton's THE VAMPIRE BOOK (Third Edition, 2011). Skal's entries represent an idiosyncratic compilation of topics he wants to highlight. The sole item under X is "Xenophobia," and under Y, "Yarbro, Chelsea Quinn." (If Y merits only one entry, that's an excellent choice.) Categories referenced include authors, actors, films, opera, literature, folkloric creatures, fictional characters, historical persons, and wide variety of miscellaneous subjects. 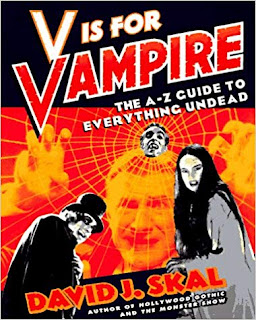 Some examples: blood, bat, fetus, lamia, Theda Bara, Sigmund Freud, cannibalism, Carpathian Mountains, cloaks and capes, Vampirella, rabid, rape, Highgate Cemetery, Edmund Blake (the first stage actor to play Count Dracula in the iconic cape), fangs, Barnabas Collins, and Charles Darwin, as well as obligatory topics such as Bela Lugosi, Peter Cushing, Christopher Lee, and many stage and screen adaptations of DRACULA. With an introduction titled "Vampires, Descending a Staircase," the text is written in Skal's usual witty style. It's embellished with numerous reproductions of book illustrations and movie posters and stills. The volume concludes with an extensive filmography beginning in 1896, a list of vampires and vampirelike creatures, a chronological list of novels beginning in 1847, and a selected bibliography of nonfiction and anthologies.

Strangely, this handsome trade paperback is out of print, but many inexpensive used copies are available. All devoted vampire fans should have it on their shelves.

Being a vampire is not what it seems like. It’s a life full of good, and amazing things. We are as human as you are.. It’s not what you are that counts, but how you choose to be. Do you want a life full of interesting things? Do you want to have power and influence over others? To be charming and desirable? To have wealth, health, and longevity? contact the vampires creed today via email: Richvampirekindom@gmail.com