Somehow I missed Alyxandra Harvey's YA novel MY LOVE LIES BLEEDING (2010) when it first came out. It offers an unusual slant on the nature of vampirism. The title, although evocative and romantic, has little apparent connection with the story other than suggesting a Gothic ambiance. In fact, this book isn't a romance, although it has two subplot threads that hint at future developments along that line. It doesn't fall into the Gothic genre, either, in my opinion, being contemporary fantasy with a scientific rationale for its paranormal elements. Harvey explains the vampire condition as a disease, apparently both inherited and infectious. A young pre-vampire remains indistinguishable from a human child until the age of sixteen. Then he or she undergoes the "bloodchange," emerging from the ordeal either dead or—when nourished by vampire blood to facilitate the transition—a vampire. The young adult gains immortality, speed, super-strength, blood-thirst, and other vampiric traits, including a vulnerability to sunlight that slowly decreases with age. There are several factions and clans, and at least one aberrant subspecies, all nominally ruled by a Vampire Queen. A fanatical vampire-hunting organization called Helios-Ra complicates the situation. 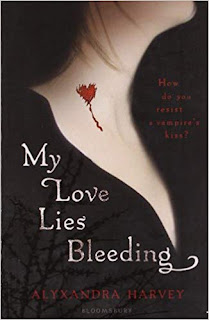 Solange, the first daughter born to the Drake clan in vampire memory, bears the burden of a prophecy that she's destined to rule her kind, a status she emphatically rejects. On the verge of her sixteenth birthday, she's plagued by unwanted suitors. Irresistible vampire pheromones make matters worse. Her best friend, Lucy, is a human teenager whose hippy-spiritual, back-to-nature parents don't seem to mind that she associates with bloodsucking creatures of the night, who, to be fair, live on animal blood. They drink from human donors rarely and only by consent. Lucy and Solange narrate the story in alternate first-person chapters. Solange's family learns a bounty has been placed on her. The Drake clan has a tenuous truce with Helios-Ra, which this development threatens to unravel. The Vampire Queen targets Solange out of jealousy, since the Queen can't fathom the idea that a young female would not want to usurp the throne. Meanwhile, eighteen-year-old Kieran Black, a newly trained agent of Helios-Ra, whose father was killed by vampires, tries to attack Solange and her family. Kidnappings, escapes, pursuits, recaptures, and apparent betrayals throw him and Solange together. They fight a reluctant mutual attraction, and he begins to realize that not all vampires are alike and that most aren't ravening killers. At the same time, Lucy and Nicholas, one of Solange's many overprotective brothers, recognize feelings for each other that they've been denying.

This book is the first in a series, with plenty of sequel hooks. Fortunately, however, it has a satisfying, non-cliffhanger ending.