Film scholar David J. Skal's lavishly illustrated, highly entertaining, detailed nonfiction book HOLLYWOOD GOTHIC (1990; second edition 2004), contrary to what the title might suggest, isn't about horror movies in general (for that topic, read his fascinating, wide-ranging THE MONSTER SHOW) or even vampire movies in general. The subtitle summarizes the content: "The Tangled Web of DRACULA from Novel to Stage to Screen." The central chapters focus on the original play and the adaptation and production of the 1931 Bela Lugosi film from it, along with the lesser-known Spanish version shot from a translation of the English script, on the same sets with a different cast. 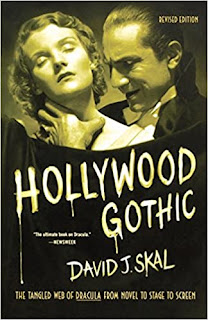 HOLLYWOOD GOTHIC contains much more material, though, preceding and following the broad, deep coverage of the origins and development of the 1931 film, as well as Lugosi's career. The first chapter surveys nineteenth-century vampire fiction before exploring Stoker's life and the writing of DRACULA. Chapter Two narrates Florence Stoker's copyright battle over her late husband's novel and the unauthorized silent classic NOSFERATU. Next comes the history of the DRACULA play in both its British and American versions. After the two chapters on the Lugosi movie and its Spanish doppelganger, the final chapter, "The Dracula Century," covers subsequent adaptations of and sequels to the novel, from the Universal and Hammer movies to many less familiar works.

This book tells you everything you ever wanted to know about the transformation of DRACULA from novel to play to film, the classic 1931 movie, and the life of Bela Lugosi, in addition to voluminous information about other DRACULA versions over a span of more than sixty years. Written in Skal's lucid, engaging style, it's a can't-miss read for any fan with a strong interest in any of those topics.