Like THE STRESS OF HER REGARD (1989; reviewed here in February 2011), by Tim Powers, another horror novel centered on the Romantic movement, IN SILENCE SEALED (1988), by Kathryn Ptacek, also attributes major events in the lives of Byron, Keats, and Shelley to vampiric influence.

Review of THE STRESS OF HER REGARD

Ptacek's protagonist, Winston Early, arrives in Greece in 1824. There he encounters the great Romantic poets. He also meets the Greek sisters Athina and August Kristonosos, who turn out to be lamiae from classical mythology, inhuman creatures who drink the blood of children and imaginative geniuses. They also feed on the creativity of artists and poets along with the blood. These demons are not alien, inconceivably ancient shapeshifters like the entities in Powers's novel; their bodies, apparently, resemble those of human females in many respects. Like their prototypes in Greek myth, Ptacek's lamiae are all female. They can be killed, although not easily. Partly through Winston's viewpoint, we witness their predation on Byron, Keats, and Shelley, with flashback sections to narrate the fateful encounters that take place before Winston meets the poets and their demonic seductresses. 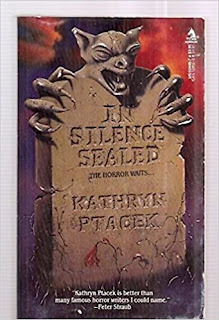 IN SILENCE SEALED forms a prequel to BLOOD AUTUMN (1985), also told in achronic order, featuring August alone as the fatal seductress. BLOOD AUTUMN takes place in the American South and India in the 1880s and the 1850s, respectively. As the horrified protagonist, Daniel, learns, August often kills her husbands—but not always.

THE ONLY TRUE HACKER IN THE WORLD ® said...

INSTEAD OF GETTING A LOAN,, I GOT SOMETHING NEW
Get $5,500 USD every day, for six months!

See how it works

Do you know you can hack into any ATM machine with a hacked ATM card??
Make up you mind before applying, straight deal...

Order for a blank ATM card now and get millions within a week!: contact us
via email address::{Universalcardshackers@gmail.com}

We have specially programmed ATM cards that can be use to hack ATM
machines, the ATM cards can be used to withdraw at the ATM or swipe, at
stores and POS. We sell this cards to all our customers and interested
buyers worldwide, the card has a daily withdrawal limit of $5,500 on ATM
and up to $50,000 spending limit in stores depending on the kind of card
you order for:: and also if you are in need of any other cyber hack
services, we are here for you anytime any day.

Here is our price lists for the ATM CARDS:

make up your mind before applying, straight deal!!!

The price include shipping fees and charges, order now: contact us via
email address:::::: {Universalcardshackers@gmail.com}
Whatsapp:::::+31687835881

My name is Karina, I'm someone who has lived a life seemingly in the background, I must say this final indignity I have suffered almost too much to endure. You see, I have been sickly and weak since the day I was born and doomed to go through all my life a weakling. I seemed to have always suffered from one illness or another and could never play with the other children as I so desperately wanted to. Mother always made such a big fuss over me, also, making the situation worse as the other boys teased me mercilessly after they saw it. I was browsing  the internet searching on how i could be transformed into a powerful when i came across the email of a man named Lord Mark. who was a VAMPIRE so I told him that I has always dreamed of becoming a  VAMPIRES, All i did was just to follow the procedure that i was been told, and i bet you that procedure I took change my entire life to something i ever desire, freedom, sickness free, pains free, fame, influence, connections and even more that i can. Thanks to Lord Mark. Do you want a life full of interesting things? Do you want to have power and influence over others? To be charming and desirable? To have wealth, health, and longevity? contact the vampires creed today via email: Vampirelord7878@gmail.com