Kiss of the Vampire

Nancy Baker's rather generically titled KISS OF THE VAMPIRE (1993) first appeared under the more evocative and memorable name THE NIGHT INSIDE. While this may not have been the first novel to use its plot premise, it's the earliest I remember reading, and the trope remains rare, as far as I know. (In fact, the only other example that comes to mind at the moment is Robin McKinley's SUNSHINE, reviewed here in July 2015.) The villains hold an ordinary human female captive with a vampire to serve as his nourishment, and the two characters make an alliance to escape.

In the prologue, 400-year-old Dimitri Rozokov wakes up in a warehouse where he has lain dormant for most of a century. The successors of the enemy from whom he was hiding have found him. The viewpoint then shifts to the protagonist, Ardeth Alexander, a graduate student pursuing PhD research on nineteenth-century Toronto. Her studies attract dangerous attention. She gets kidnapped off the street and wakes up in a dungeon-like underground space, with a strange man in the cell next to hers. Their captors forcibly hold her arm through the bars for the vampire to feed on. Actually, they were supposed to have killed her immediately but have decided to make use of her first. Her horror at her desperate plight increases when she's made to watch the vampire participate in a pornographic video that culminates in the draining to death of the "star." Recalling fellow students who've mysteriously vanished in the recent past and correlating their research fields with her own, she figures out the identity of the vampire. Moreover, she gradually realizes the kidnappers are worse threats than he is, and she opens a dialogue with him. Once recovered from the initial mindless hunger that followed his revival, he turns out to be humane and, toward Ardeth at least, gentle. They devise a plot to escape—a plan that requires Ardeth to be transformed into a vampire and avoid getting staked like the other dead girls who've been buried in the nearby woods. Considering undeath preferable to certain death, she "dies," rises from her makeshift grave, and frees Rozokov. 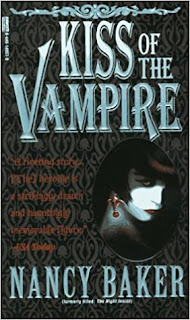 To her shock, after their escape Rozokov insists they must separate. They're safer apart than together, and anyway vampires are meant to be solitary, or so he claims. The second half of the novel shows Ardeth adjusting to the vampire existence, while Rozokov struggles to find his way around modern Toronto with no knowledge other than what he learned from long talks with Ardeth, as well as no money. (He has no way to prove his identity and access the investments he accumulated a century in the past.) By chance, Ardeth's sister learns she isn't dead and launches an intensive search for her. Meanwhile, agents of Althea Dale, the rich, eccentric descendant of the man who'd uncovered the truth about Rozokov a hundred years earlier, are scouring the city for both vampires.

Baker thoughtfully develops the predicament of an ancient vampire dumped in a modern metropolis with no contacts or money. Regardless of his supernatural powers, he can't simply become a prosperous city-dweller overnight. In fact, given the wealth and resources of the hunters seeking him, posing as a homeless, deranged street person is, for the moment, his safest course of action. Meanwhile, Ardeth, cutting all ties with her former life, copes with her change on her own. The settings are richly detailed. The characters are vivid and three-dimensional, with the partial exception of reclusive Althea Dale, who's determined to possess and use the vampires, and even she has interesting quirks that make her more than a flat melodrama villain. Realistically, Ardeth's reinvention of herself in her transformed existence springs organically from her personality and the hazards of her situation; she doesn't automatically become a demonic monster simply because she's a vampire.

A sequel, BLOOD AND CHRYSANTHEMUMS, explores Ardeth's further growth as a vampire and the development of her relationship with Rozokov in still more depth, with the addition of new characters. Baker also wrote A TERRIBLE BEAUTY (reviewed here in April 2015), a beautiful gender-flipped vampiric "Beauty and the Beast" in a remote Canadian wilderness setting.