The Vampire As Alien

[Michele's note: I want to take a moment to introduce Margaret L. Carter who will be regularly blogging with us at VampChix once a month.  Please visit her website at: www.margaretlcarter.com!] 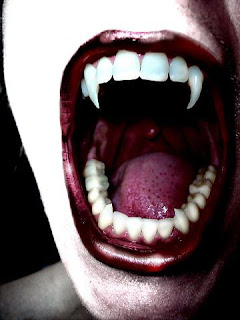 In my opinion THE VAMPIRE TAPESTRY, by Suzy McKee Charnas, is one of the greatest vampire novels of the twentieth century. It’s one of the earliest book-length works of fiction to explore the question, “How would nature design a vampire?” (as the vampire himself rhetorically asks in the first section of the book). The inimitable Dr. Weyland, the sole survivor of his species, so old he remembers no parents or childhood, has an acerbic view of the human race, the “cattle” he preys on. Although he can’t digest animal blood and therefore must feed on people, to avoid unwelcome attention he usually refrains from killing or seriously harming his victims. He has great physical strength and endurance and extremely keen senses, but no overtly “supernatural” abilities such as transformation or mesmerism. THE VAMPIRE TAPESTRY chronicles a series of events that open him unwillingly to an emotional connection with some of the short-lived creatures he prowls among. He periodically renews himself by withdrawing into a state of suspended animation, to rise decades later with his clear-eyed predator’s perspective restored.

The naturally evolved vampire, the “vampire as alien,” occasionally appeared in short stories of the classic pulp era, e.g., the vampire child of Richard Matheson’s “Dress of White Silk,” the family of “monsters” in Ray Bradbury’s “Homecoming,” the pragmatic predator in Jerome Bixby’s “Share Alike.” With the veritable explosion of vampire fiction that started in the mid-1970s, however, especially with a new emphasis on vampires as sympathetic protagonists, natural vampires proliferated at novel length.

Miriam in Whitley Strieber’s THE HUNGER, like Weyland, is the last of her species (as far as we can tell in this novel; the sequel, published years later, reveals otherwise). Unlike Weyland, she admits to being lonely, treats her human companions like pets, and tries to transform some of them into creatures like herself—with consistently disastrous results. Elaine Bergstrom in SHATTERED GLASS introduces the Austra clan, subject of several later novels. They can interbreed with human beings, and they have tremendous powers, including regeneration from severe injuries, telepathy, and the hypnotic compulsion common to many literary vampires. The nonhuman creatures in FEVRE DREAM, by George R. R. Martin, combine traits of the traditional vampire and werewolf, since they go into a frenzy of uncontrollable bloodlust for only a few days each month. They can’t reproduce with our kind, and their race is dying out because of the infrequency with which their females go into heat. Jacqueline Lichtenberg presents a race of extraterrestrial vampires in THOSE OF MY BLOOD. Stranded on Earth, they’ve interbred with humanity. One faction, the Tourists, regards human beings as simply prey, while the other group, the Residents, has a moral and emotional investment in the welfare of the people around them. These vampires can exert powerful influence over unsuspecting human minds. Octavia Butler introduces a child vampire whose family has been wiped out in FLEDGLING. Her vampires live in symbiosis with human companions who often fill the role of lovers as well as food source.

In the design of a natural vampire, many questions have to be answered, leading to practically endless intriguing variations: Can they breed with human mates? Are they solitary or pack predators? Can they consume any food besides blood? If not, does the blood have to be human, or can it come from other animals? Do they have to kill when they feed? Do they have any adverse reaction to sunlight? (Daylight didn’t destroy the classic nineteenth-century vampires such as Carmilla and Dracula, nor were all folklore vampires limited to nocturnal activity.) Are they immortal or only long-lived? What can kill them? What powers do they have? Any psychic abilities? 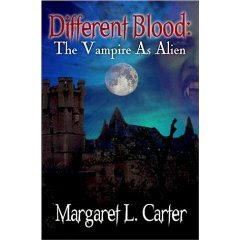 Many other authors besides the few mentioned here have explored these possibilities. I discuss this theme in fiction from the mid-nineteenth century to the early 1990s in my nonfiction book DIFFERENT BLOOD: THE VAMPIRE AS ALIEN, published by Amber Quill Press (www.amberquill.com). My own vampires fall into this category. Beginning with DARK CHANGELING, published by the Hard Shell Word Factory (www.hardshell.com), I’ve written numerous novels and stories in what I call the “Vanishing Breed” universe. Click on that phrase in the sidebar of my website, Carter’s Crypt (www.margaretlcarter.com), for a list of these works in internal chronological order.

While giving vampires the power to 'turn' mortals into one of them, I think, gives them a greater power of seduction, I've always been intrigued by the idea of 'what if vampires gave birth to live young?' It's also interesting to explore 'how are my vampires made?' Books and movies don't always offer explanations -- the vamps in The Lost Boys are just there, but when one is creating a fictional world about them in novels, it becomes quite the mystery to solve.

The "vampire as separate race" sub-sub-genre is one of my favorites. I love practically all of the books that you mentioned in this article. I also liked Poppy Z. Brite's "Lost Souls," which also falls in this category, but seems to be one of those divisive books!

Yes, LOST SOULS is an intriguing twist on the theme. It's one of the books I discuss in DIFFERENT BLOOD. The story of Nothing, the half-vampire boy whose adolescent rebellion against his adoptive parents leads to the discovery of his true background, is definitely compelling. But as for "divisive," it's easy to see why. I found the book fascinating but don't actually *like* her vampires as people.

You called it, Margaret - when I read it, I could not find a character that I could latch onto. I didn't mind the vampires being moral deficient (to put it one way), but even the mortal protagonists just weren't clicking with me. But I definitely give Brite a lot of moxie points, and I found the atmosphere to be exquisite.

I actually have had DIFFERENT BLOOD for a number of years, though the cover is different than the one displayed here. I remember being glad that this subgenre had a book to call its own.

Hey Margaret! Thanks for the mention.

Vampires is not at all like in the movies or books. Sure, I understand. You are young you have the whole world open to you. You can be anything that you choose if you apply yourself and try hard to work toward that goal. But being a Vampire is not what it seems like. It’s a life full of good, and amazing things. We are as human as you are.. It’s not what you are that counts, But how you choose to be. Do you want a life full of interesting things? Do you want to have power and influence over others? To be charming and desirable? To have wealth, health, and longevity, I can help you solve any problem you are having
(1) If you want your ex back.
(2) If you want to stop having bad dreams.
(3) You want to be promoted in your office.
(4) You want women/men to run after you.
(5) If you want a child.
(6) You want to be rich.
(7) You want to tie your husband/wife to be yours forever.
(8) If you need financial assistance.
(9) If you want to stop your divorce.
(10 If you want to divorce your husband.
(11) If you want your wishes to be granted.
contact the Vampires Lord on his Email: Richvampirekindom@gmail.com