Guest: Sharon Ashwood on vamps, Dark Kirk and embracing the dark side

Welcome Sharon Ashwood today!  Her latest, SCORCHED, is available December 1st.  Only one week to wait for it!  Romantic Times BookClub magazine gave it a TOP PICK!  Read the blurb at the bottom of Sharon's post.  One lucky commenter today or tomorrow will win a copy.  Winner will be announced Wednesday. 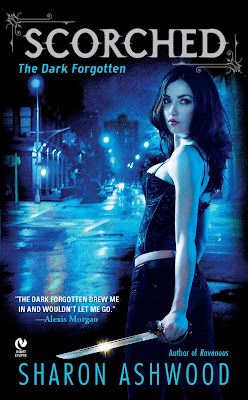 I remember reading Stephen King’s vampire classic, Salem’s Lot, when I was in high school and being scared spitless. When I got through hiding under the bed and stopped to analyze what was giving me the willies, it was more than just a general fear of monsters.  I was horrified by the notion of a person turning against their loved ones—and that’s an evil humans can manage without supernatural assistance. King’s genius was in holding up a mirror to our own worst impulses.

The vampire is often identified with the human’s shadow side, an embodiment of forbidden desires, twisty Freudian naughtiness, yadda yadda. Also, he/she is usually given the basic superhuman power pack:  super strength, super speed, mind control, and (in the classic version) a cape.  Why empower the vampire, along with werewolves, Edward Hyde, and the likes?

Let’s turn to the font of all modern wisdom, Star Trek.  There is an episode in which Captain Kirk is divided into two halves—a nice but ineffective Kirk, and an aggressive but decisive Kirk.  Neither side functions well without the other, but the Dark Kirk definitely has the alpha male oomph we associate with vampires. In other words, our “monster” side, while scary, has the kick-ass stuff we need to get the tough jobs done and survive.

Constance, my heroine in Scorched, is a vampire faced with the choice between claiming her superhuman powers—which could result in her “going bad”—and staying powerless and “good” forever.  She’s managed to duck the decision for a good long time, but now her adopted son is in danger and she needs those powers to save the day. She’s faced with the choice of being a monster or a moral failure.  She’s terrified. Up until now, her existence has been one of untried innocence—it’s easy to be good when there’s no temptation around. Now she has to find out what she’s made of, and take charge of her own fate.

I think Constance’s story is representative of a major shift in how we think about vampires. They’re morally complex and, in my opinion, a whole lot more interesting than the bloodsucking hordes in Salem’s Lot.

Has since been modified by current writers to something like:

In other words, we have added the possibility that our shadow side vampires can play nicely with our conscience.  Despite our modern day fixation with doom and gloom, we’ve admitted the possibility of triumph.  It also raises the stakes (pun intended) because we’ve given our vamps more ways to fail.

What is your favourite example of a vampire’s struggle with his or her dark side?

SCORCHED blurb:  Welcome to the Castle. The price of admission is your soul.

Ex-detective Macmillan always had a taste for bad girls, but his last lover really took the cake—and his humanity. Now half-demon, Mac's lost his friends, his family and his job.

But Constance, a strangely innocent vampire trapped in the supernatural Castle prison, needs his help. Her son has been kidnapped, so suddenly Mac has a case to work—one that embroils him with a mad sorcerer, an even madder city council, and a winged love god. The trail leads deep into the supernatural prison, and Mac soon learns that cracking the case will cost him his last scrap of his humanity.

Fiery, vulnerable Constance will do anything for those she loves, including Mac. He'll be damned if he turns his back on her… and a demon forever if he doesn't.

One of my favorite examples is still Anne Rice's Louis in Interview with a Vampire. Even when he finally accepts what he's become he still strives to be more than he is.

I don't like to give spoilers so this book will remain the vampire-book-that-shall-not be named.I reviewed a book recently where the vampire- aside from his feeding habits, also has the ability to shift into shadow form and cause great bodily harm in other ways. He has the innate ability to kill, if need be, but that ability remains dormant "until" the life of a mortal woman is at stake. (Pun intended) It's only when this woman he loves is in danger that he succumbs to his "evil" abilities. It's that struggle, should I, shouldn't I- until something happens where it's no longer a question; your action becomes automatic, unconscious.
Awww....heck, I still love it when the hero protects the heroine. Especially a vampy hero!

Hello! The original "Salem's Lot" TV movie scared the stuffing out of me! That little boy vampire floating outside and tapping on the window of his friend's bedroom. Tap...tap...tap...creeeeepy!!!

Speaking of "Star Trek", isn't William Shatner the "font of all modern wisdom" : )

I would have to say that Barnabas Collins (the proper patrician Vampire) from "Dark Shadows", and Angel/Angelus from "Angel" are my favorite brooding vamps. Barnabas still tried to maintain his upper-crust elite image. Nothing ever turned out right for Angel, no matter how often he rescued someone or saved the whole human race!

The one vampire that always comes to mind is LeStat. There is just something that draws me to him. Have a great day.

I have to go with Edward Cullen. The whole "I have no soul thing." Just turn Bella and get it over with. I have to say the one Stephen King story that messed with me has to be the one where there was a storm and the lot for the children. I like Sharon's new twist on vampires.

My favorite vampires are the Carpathians in Christine Feehan's books. I like the idea that it takes something outside of them selves to balance their nature.

Hi Sharon :)
Thank you for the excellent guest post!
I really enjoyed Louis' struggle in Interview With The Vampire.
:)
I hope you have a wonderful week and a Happy Thanksgiving.
All the best,
RKCharron
xoxo

I'm glad to see that I'm not the only one with the Carpathians as my choice.

Love this series...its so amazing. i was hooked

The first example that popped into my head is Anne Rice's Louis. Talk about beating yourself up over what you are.

I love Merit, from Chloe Neill's Some Girls Bite. She's struggling more to deal with being changed into a vampire more than worrying about going dark, but it's still a struggle worth reading.

I want to mention Spike from the world of Joss Whedon. He started off as a very bad guy and then had some moments of heroism (while still being somewhat bad).

I like Anna Strongs struggle from The Becoming. Her turning was dramatic and then to watch her struggle with the question are vampires good or bad is intresting. Also for Anna to find that every myth and lore about vampires is prety much not true is entertaining

an example of a vampire's struggle that comes to mind is Stefan from L.J Smith Vampire diaries novels.

I think Louis in Interview with a Vampire shows the most interesting struggle.

Spike from Buffy the Vampire Slayer was mentioned. I think Angel from the same series and his own spinoff is another example. Trying to atone for the evil he's done previously, and fighting that darkness all the time.
I read a lot of vampire stories, but it's hard to think of any particular examples at the moment. I do enjoy those types of struggles in a vampire tale, that adds interest to the story.

There are two vampires with an inner struggle that I love. Lestat who needs no further introduction. And Stefan Salvatore from the vampire diaries. Edward Cullen btw is another one of my fav. And come to think of it I also liked Angel. And Lucern Argeneau from Lynsay Sands single white vampire. Although I'm not sure how strong his inner struggle is. Seems like there are a lot more than 2 vamps I love. But if I have to choose just one I pick Lestat. For we go way back. :)

I think one of my faves would have to be Blade...I am drawn by his inner struggles in doing good while trying to fight his darker nature.

Am so looking forward to reading your book.

I think the best example of a vampire fighting her dark side is Ivy from Kim Harrison's The Hollows series. She is a strong woman but with bloodlust. She doesn't like her dark side so she constantly fights it.

I've got to go with Louie in Interview With A Vampire. He was actually my favorite in the movie.