What is a Dhampir? 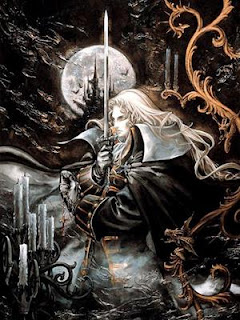 Well, it’s a half vampire, half human hybrid of course, Blade taught us that. But this idea didn’t come from the entertainment world. The idea of a vampire/human mix comes straight from age-old vampire lore, Gypsy lore to be exact.
Dhampir is the name the Slavonic Gypsies came up with to call the child of a vampire. This child has some of the powers that its vampire parent has, what these powers are depend on the vampire and myth. How a dhampir is made is also a something that Gypsies debated on. The most commonly believed method is that a newly made male vampire is super horny and feels the need to go back to his human widow to sex her up, if he didn‘t have a wife during life, then he‘ll go after any young woman he can find. It was then possible for his wife or whoever to become pregnant with his vampire baby. That baby was then known as a dhampir but some other Gypsies didn’t use this word, sometimes they would call the child a vampir (if male), vampuiera (if female), vampijerovic, or lampijerovic.  Some believed that this child was always male, then you had others saying that it died shortly after birth because its body was made of something like jelly and another rumor was that it in fact wasn’t special at all – that it was a normal human. But for the most part it was believed that it was a child with a  vampire parent and a human parent and that because of its vampire blood it had special powers. And when it came to inheriting the lust for blood, well that’s another thing that changes from myth to myth. In some cases a dhampir craves blood, but other times it has no desire for it.
These dhampirs born were usually turned into vampire hunters because of their powers to detect and destroy the undead. Yup, that didn’t come from Blade or BloodRayne, dhampirs in the past were said to hunt vampires. In Serbia it is believed that vampires are invisible and that only dhampirs are able to see them, therefore dhampirs were paid to hunt down and kill these vamps. How this played out is a dhampir would  go out to kill the vampire, if you were watching you would see a person flailing around, apparently wrestling with an invisible foe. After some time the dhampir would declare to the watching villagers that the vampire was dead and then he or she would collect a large payment from the town. The last time this happened was in 1959 in the Yugoslavian province of Kosovo.
- Moonlight

Moonlight loves to write about, read about, and watch movies and TV shows especially pertaining to vampires and werewolves. She is a vampire/werewolf junkie.  You can find her writing for top genre sites like vampires.com <http://vampires.com>  or werewolves.com <http://werewolves.com> .  She is secretly a vampire and watches you when you sleep… ok that’s a lie, she isn’t a vampire…but she just might be watching you as you sleep. You can reach her at moonlight@darkness.com

*claps for the Castlevania pic*

It is believed, in most modern fiction at least, that the dhampire/dunpeal "has all the powers and none of the weaknesses of the vampire." sometimes though, it does have the bloodlust, sometimes not.

Blade, for example, gained the bloodlust because he was bitten by Dracula in Marvel comics. Some are naturally that way.

The dhampire actually would make a good romance hero.

Did Erica Orloff do a dhampire in her Nocturne? Was it called Blood Son?

Thanks for posting this -- I've seen the word 'dhampir' and knew it was a hybrid vampire child, but this was a great way for me to learn the mythology behind the dhampir (without having to do a lot of work on my part ;) Thanks Moonlight!

Although it is more a fantasy series with vampires the Noble Dead Saga by Barb and JC Hendee features a female Dhampir as one of the main characters. The series is a good read if you like elves with your vampires.

Miss Raven beat me to it, but I was also going to bring up the Noble Dead series. I'm reading book 5 now. Great combo for those who love both paranormal and fantasy.

You're welcome Nicole :)
I'm glad you guys liked it.

Michele-yes, she did. And it was unique on whole variety of levels.

dhampirs are among us and you may never know it. prinve fear is the sole elder of the dhampirs. the van helsings, the phd (paranormal hunters division) are no more because the dhampirs took them out. i am prince fear. fear the dhampir