That was the feeling I got from the movie, sort of the old noir film look to it.  I really liked the milieu.  Stylish, without trying too hard.  Actually, I was happily surprised that the movie was so good.  I went, expecting it to be a gore-fest with stupid acting and idiot vampires.  Not so. 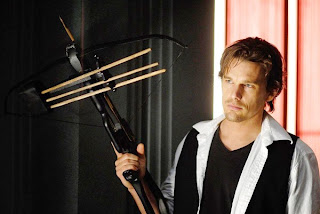 The initial minutes of the film sets up the world without shoving it down your face by saying 'these are the rules'.  Instead you see vamps standing in line for coffee with '20% blood added' and Ethan Hawkes' hematologist drives up to work and you don't see his reflection in the side mirror of his car.  Nice little touches everywhere in the movie.  Except that damned bat!  (I warn you about the bat.  It gets annoying.)

Set only 9 years into our future, the world is dominated by vampires, yet the human blood supply is running low.  CEO of the human harvesting corporation is played subtly by Sam Neill (Does that man ever act poorly?  The answer is: no.)  Hawkes is a vampire on a mission to create synthetic blood, but would prefer to find a cure for vampirism.

Enter Willem Dafoe doing a spin as a human (mostly), who looks like he walked out of a greaser movie, but is willing to trust Hawkes with a secret to save mankind.  Or is that vampirekind?

There are some great twists.  A car chase scene had some nice drama with the bullets fired by the bad guys piercing rays of sunlight through the car a vampire is driving.  Nothing is overdone.  It was all very nicely balanced.  The gore was there, but seriously?  The blood looked too much like chocolate syrup.  I would have appreciated a more crimson vintage.  And it took me a while to understand the whole 'subspecies' hiding out in the subways.  Why so strong if starving?  And what was with Hawkes' back door?  Couldn't he afford a decent lock?

Many reviews give this movie a ho-hum, mid-scale rating.  I'd rate it just above middle.  If you think too hard, you might start questioning our own society and it's dog-eat-dog mentality (which the film showcases nicely at the end), but I never want to think too much watching a horror flick.  Just pass the popcorn, and don't put too much of that nacho cheese salt on it, thank you very much.

All in all, a fun night at the movies!
Posted by Michele Hauf at 6:20 PM

Great review. I've been looking forward to watching Daybreakers but was a bit discouraged by the lack luster reviews.

I went and watched Daybreakers today. I really enjoyed myself. The way it ended was perfect because it left open so many possibilities. My mind just kept thinking of different scenarios for their future.

I would definitely rate this film above average more of a 4/5 rating.

I really enjoyed it too. I'm still an Ethan Hawke fan.

I went to watch it yesterday, i thought it was pretty good. :)

thanks for the review and giving snaps to Sam Neill. No, I don't think he ever acts poorly.

I was hoping to see this soon. The cast looks incredible, I will watch anything with Sam Neill in it. I really loved him in In The Mouth of Madness.

Also, I love the props to the entertainment factor. I don't want a dissertation on society when I go to see a horror flick, I want to be entertained.

Glad to hear it! The previews made it look like one of those teen blood bath movies.

I have to agree with Mandy about the excess blood in movies. That's the reason I almost didn't go to see this one. The truth is, there is a blood bath in this one, and a few exploding bodies, so the gore is there. BUt like I said, it was sort of like chocolate syrup colored gore so I wasn't as freaked as I normally would be. And then didn't linger over it as they sometimes do in movies. It worked for a brief shock-value thing, but then on with the story. SO that's why I can say I liked this movie.

I really loved this! I can't wait to take my husband to see what he thinks :)

Thanks for this review -- I get to see it this coming weekend. All I have to say is that it's about time someone made Ethan Hawke a vampire!