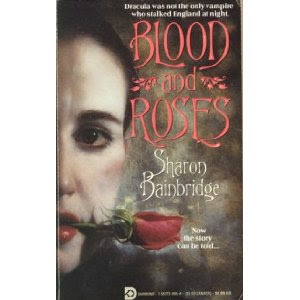 If you want to read a delightful novel that might be described as "Jane Austen meets Bram Stoker," published long before the current "mash-up" fad, pick up BLOOD AND ROSES

(1994) by Sharon Bainbridge. This author, a pen name for the writing team of Sharon Farber and Sharon Rose, actually sets the plot in the late Victorian era rather than the Regency, as evidenced by mentions of the American Civil War and the works of Charles Darwin. After the Gothic prologue in which a gullible village girl meets a vampire seducer by moonlight, however, the main action morphs into what reads like a comedy of manners worthy of Austen. This novel could appropriately begin, "It is a truth universally acknowledged that an unmarried vampire in possession of a large fortune must be in want of a wife." Mrs. Portland, social-climbing wife of a rich merchant, is determined to marry her younger daughter Guenevere to the mysteriously reclusive Sir Geoffrey Utley. Elaine, Guenevere's sensible older sister, takes an instant dislike to Sir Geoffrey, who appears less like Bingley than Darcy, barely concealing his disdain for the local mothers pushing their daughters at him. Meanwhile, Elaine's cousin Violet, a doctor's daughter with up-to-date medical knowledge and a love of science, becomes acquainted with the progressive Dr. William Praisegood, who has come to High Grimmire to investigate an epidemic of "green sickness" (anemia) among the working-class girls. When a young lady drops dead of that same illness at a ball given by the Portlands, the suspense and horror facets of the story shift into high gear. Dr. Praisegood explains vampirism as a contagious disease with which he and his physician ancestors have had long experience. Who is the master vampire preying on the girls, and even if he is found and destroyed, can any of the new undead he has created be redeemed from the compulsion to feed on unwilling victims?

While there's ample horror and pathos, the witty dialogue ensures that comic relief is never far away, yet without undercutting the terror of an unknown vampire stalking the village. Elaine's slightly ga-ga great-aunt, her nominal chaperon, matter-of-factly accepts the possible infestation of vampires as just another interesting episode in a lifetime that has seen much worse, such as the Napoleonic wars, and she comes out with eccentric remarks at the most inopportune times. Violet reacts to a summary of Polidori's "The Vampyre" with the levelheaded and exasperated remark, "You mean the silly young twit lets an undead monster kill those near and dear to him because he gave his word under trying and falsified pretenses? He deserves to be in a madhouse!" I can't quote the most deliciously funny line in the entire book, because it gives away the main secret of the plot. (It's on page 268; if you read the novel, you'll spot it.)

I guarantee this story will rivet your attention. Every time you're sure you've identified the villain, something else happens to cast doubt on your assumptions. The ending, dramatic but laced with humor, impressed me as totally satisfying. Aside from a few typos, the book seems to me practically perfect except for a problem with the prologue that I didn't notice until this reading (my third or fourth). Maudie, the victim seduced by the vampire "lord," doesn't seem to recognize him in that scene, and there's no plausible reason why she wouldn't. The authors can be forgiven for misleading the reader in this minor way, though. Don't trust the cover blurb, by the way. It's riddled with inaccuracies. The reference to Dracula and Van Helsing has nothing to do with this novel, which is set well before DRACULA, and Van Helsing is mentioned in the text only once in passing (as a young man). Nevertheless, BLOOD AND ROSES does expertly evoke the atmosphere of a classic vampire novel, but as filtered through the self-reflective lens of over a century of genre development.

See what you did? You made me order yet another book. And because I wanted free shipping (which equals a free book) I had to order 4 books. Le sigh. Now I probably have 600 books waiting to be read... ;)

I don't know why but the cover looks familiar but I don't recognize the story.

"See what you did? You made me order yet another book. And because I wanted free shipping (which equals a free book) I had to order 4 books."

Then my nefarious plan has succeeded! (evil laughter)

Taking over the universe one vampire at a time --