Janet Mullany is back to day with details about the anthology BESPELLING JANE AUSTEN.  She's also generously offered to give away a copy of the book to one lucky commenter!  So answer her question in the comments and check back in on Friday for the winner's name.

Jane Austen and Terry Pratchett taught me all I know about vampires.
Going to the most obvious one, I love Terry Pratchett’s Discworld series and his depiction of vampires, fastidious aristocrats who employ an Igor (“Yeth, mathter” etc.); and the missions in Ankh-Morpork that seek to reform vampires with Salvation Army-style meetings where the afflicted enjoy stirring inspirational songs, buns, and cups of tea. And if you haven’t read Pratchett, go and check him out now at terrypratchettbooks.com. He’s one of the smartest, funniest writers around.
But when I was asked to join the Bespelling Jane Austen

anthology I had to consider writing a vampire, uh, seriously. Moreover, it was my first attempt to do something terrible to Jane Austen by using one of her books as the basis of a novella and I chose Emma

, not only my favorite Austen but happily one the other writers, Mary Balogh, Susan Krinard, and Colleen Gleason didn’t want. They chose Persuasion 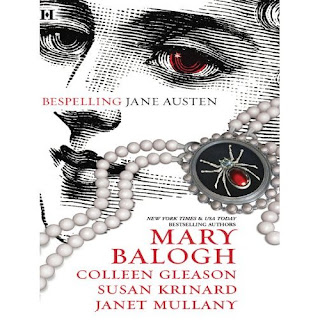 There was one character who stood out in Emma as a likely vampire—someone who is charming and untrustworthy and feeds upon others’ affections, and is moreover hawwwt. Yes, Frank Churchill. In Emma he’s the charismatic stranger who comes to town, develops a serious flirtation with the matchmaking heroine, and harbors a secret that drives the plot of the entire novel. I updated Emma to present-day Washington DC, where the heroine runs a dating agency, not altogether successfully, for the city’s paranormal population; it may be the only romance novella with this opening line: She turned me into a frog.
Frank is a lawyer—what else? All those billable hours after dark and a natural rapaciousness.
And here’s Frank and Emma’s first meeting and one of my favorite scenes:
“I hope I live up to your expectations.”
He refilled my glass and stared into my eyes. “You will.”
With a great effort I stopped myself sliding under the table in a boneless heap of desire. It was only standard vamp stuff, I reminded myself, his biological destiny. In a way he couldn’t help himself. He’d be coming onto the geraniums in the hanging basket if I wasn’t here—and even as I thought that, petals showered onto the table like drops of blood.
“You’re good,” I said, “but please don’t read my mind.”
Thanks for having me visit!
Which characters in Jane Austen’s novels, or any other classics, do you think would make good vampires?
See my site janetmullany.com for excerpts, extras, and a contest.

throuthehaze has won the copy of JANE AND THE DAMNED by Janet Mullany!  Please email vampchixmail@gmail.com with your snail mail address.  Congrats!
Posted by Michele Hauf at 1:00 AM

Catherine Bingley. She would be a classic evil vampire where as her brother would be the sweet one.

The great thing about vampire characters is they can either be evil e.g. Caroline Bingley or sexy and hawwwt e.g. Mr. Darcy, because either way they have power.

You'd both probably enjoy Susan Krinard's Blood and Prejudice in the anthology where Darcy IS a vampire!

Mr. Darcy all the way!

I really have trouble thinking of Darcy as a vampire because he's low on social skills but he's basically a good and honorable guy.

The characters I see in Austen as vamps are the mischief makers (they do have a whole lot of time on their hands, after all)--Frank Churchill, the Crawfords, Wickham, Willoughby. I think the idea of Wickham as a vicar, which was his first career choice, could have been very interesting--taking Holy Communion would have been an interesting experience.

I'm not quite sure about Henry Tilney (another clergyman!)--he's certainly a mischief maker but he's also a good person.

I think Wickham would have been an excellent vampire. He's already low on morals. And he would have had no trouble turning Lydia. =)

I think Caroline Bingley would make a deliciously evil vampire! But what about Willoughby and Mr. Wickham with all of their charm? They could be very dangerous, indeed.

How about Jane eyre's Rochester? what's one more secret?
salvagin@verizon.net