Colin Wilson's THE SPACE VAMPIRES (1976) was filmed as a disappointing movie, LIFEFORCE, but the novel provides an unusual treatment of energy-draining vampires as alien invaders. An Earth expedition in the near future discovers a vast, derelict spaceship carrying the apparently dead yet undecayed bodies of thirty or so beautiful humanoids. The aliens turn out to be alive but in suspended animation. Escaping, they prey on and possess human victims. Throughout the book, the space vampires occupy both male and female bodies, although it’s the femme fatale vampire women we see most often. Scientists speculate that distant ancestors of these beings might have landed on Earth and engendered the human species. The story reveals an added dimension, though, for the psychic-vampire extraterrestrial invaders have counterparts—not only human, but animal—already dwelling on Earth as one strand in the web of terrestrial biology. In this novel, biologists have learned how to measure the life fields of organisms with "lambda meters.” They discover the feeding of predators involves the absorption of the prey's life force. One researcher displays a graphic example with a moray eel devouring an octopus. Sexual intercourse also entails a measurable transfer of energy. Predatory behavior, "negative vampirism," aims at "total destruction of the victim.” Sex, on the other hand, can result in “positive vampirism.” Normal sexual relations include psychic tension in which, ideally, one partner’s life field can symbiotically reinforce the other’s. Carlsen, head of the expedition that discovers the alien ship (which is significantly labeled the Stranger), enjoys direct experience of energy exchange through sexual intercourse but later finds that his contact with the aliens has stimulated his latent vampiric qualities. As he perceives the situation, the alien predator has converted him into a vampire and infected him with "abnormal desires" along with "the power to carry them out.” Count Geijerstam, one of the novel's Van Helsing-like authorities on vampirism, insists that Carlsen has simply "become aware of the vampirism that exists in all human beings" and praises Carlsen for his ability to replenish his partner's energy as well as consume it. More than Van Helsing, however, Geijerstam inevitably reminds the reader of Dracula. Wilson's Count, like Stoker’s, lives in a castle with three beautiful young women who practice vampirism (in this case, positive vampirism) under his guidance. 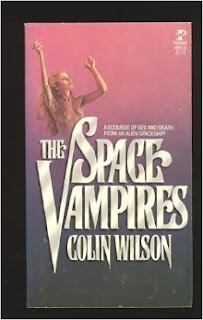 Despite this potentially affirmative view of vampirism as symbiotic exchange, the predatory model dominates the novel. Although vampirism has existed on Earth all along, an inescapable pattern in terrestrial ecology, kinship between human and alien is deemphasized; the invaders are framed as the threatening Other, to be expelled or exterminated. Speculation that the aliens have acted as “the secret mentors of humankind” isn’t followed up. Throughout the life-or-death struggle to prevent an alien from invading his brain and nervous system, Carlsen realizes, "They were enemies; nothing could change that.” The text associates vampirism with negative imagery such as "sexual perversion,” "a Venus flytrap closing on an insect,” "galactic criminals" and "lepers,” "a despot with limitless powers,” and the witches in "Hansel and Gretel" and THE WIZARD OF OZ. Carlsen himself sadomasochistically vampirizes a woman who has been possessed by an extraterrestrial, “brutally draining her energy”—at her eager request. So this rather strange and disturbing SF vampire novel portrays the nominal hero as almost as much of a predator as the invading aliens.