Off the Beaten Orbit

OFF THE BEATEN ORBIT (1961; first published as GALAXY OF GHOULS, 1955), compiled by distinguished SF writer and editor Judith Merril, isn't a vampire anthology as such. But it does include three vintage vampire tales (two being a couple of my all-time favorites), plus two other stories with some vampire content. It also features two werewolf pieces. This anthology holds a special place in my heart. I first heard of it from my high school boyfriend, who described some of the contents to me but never got around to lending me the book. I'd given up on ever actually seeing the elusive paperback when I stumbled upon it in a used book shop, long before Internet searches existed. (There are several copies available on Amazon at present.) 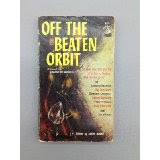 One vampire story, "Share Alike," by Jerome Bixby and Joe E. Dean, delves into one of my favorite tropes, vampires as a naturally evolved species. It centers on a symbiotic relationship between a vampire and a human sailor, the only survivors of a shipwreck, adrift in a lifeboat. Ray Bradbury's classic "Homecoming" explores the plight of an ordinary mortal born into a family of fairly benign "monsters." (They get their blood supply from a funeral home where some of their members work.) I've always been fascinated by Bradbury's portrayal of the "monsters" as normal and their human son as a mutant (long before THE ADDAMS FAMILY and THE MUNSTERS). In "Blood," one of Fredric Brown's trademark short-shorts (what's called flash fiction nowadays), a vampire couple flees in a time machine to the distant future to seek an era when humanity will have forgotten about their kind, with a disastrous and funny outcome.

In Bruce Elliott's unique werewolf story "Wolves Don't Cry," a zoo wolf wakes up one morning as a man, a change he finds deeply disturbing. In "The Ambassadors," by Anthony Boucher, Mars turns out to be inhabited by intelligent wolves, and the werewolves of Earth become interplanetary mediators. There's a vampire allusion at the end of the story.

Some other outstanding pieces include "A Way of Thinking," by Theodore Sturgeon, featuring an odd variation on a voodoo doll; an early "John the Balladeer" tale by Manly Wade Wellman, "O Ugly Bird!"; and "Triflin' Man," by Walter M. Miller, whose backwoods heroine deals decisively with an alien (advance scout for an invasion) who left her with a half-human baby after a one-night stand. Creatures such as mermaids, demons, and doppelgangers also populate the anthology.

The book ends fittingly with "Mop-Up," by Arthur Porges, in which the last man on Earth after a nuclear holocaust encounters a vampire, a ghoul, and a witch.

Email ThisBlogThis!Share to TwitterShare to FacebookShare to Pinterest
Labels: anthologies