LIVE GIRLS (1987), by Ray Garton, is a far cry from the romantic "good guy vampire" fiction that began to flourish during the 1980s. After a grim prologue featuring the kind of character a reviewer for the Innsmouth Free Press website calls "Doomed Teaser Guy," we meet unfortunate New Yorker Davey Owen. His girlfriend has just left him after yet another argument about his low-level job at a small publishing company. Meanwhile, Walter Benedek, Doomed Teaser Guy's brother-in-law, drops in at his sister's home and finds a gory crime scene. The imagery of these opening scenes sets the tone for the book with tawdry, trash-strewn streets, gloomy weather, and the horrific slaughter of Walter's sister. 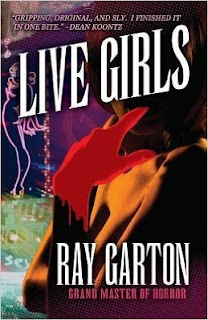 Wandering the city, mired in depression, Davey stumbles upon a sex club in Times Square called Live Girls (which we glimpsed in the prologue). There he has an encounter that leaves him drained in more ways than one, although he doesn't realize the true nature of the "smeared lipstick" he notices on the girl's mouth afterward. Any reader halfway attentive to the blurb and cover illustration, of course, knows the title of the novel (and the club) is ironic; the "live girls" are undead. After losing his job later that day, Davey returns to Live Girls for a second time, despite the blood he'd noticed in an intimate location after the first visit. Although he has no idea what's happening yet, the erotic addiction of a vampire's feeding is obvious to the reader. At the same time, Walter Benedek, determined to find out what became of his missing brother-in-law, starts watching Live Girls and notices Davey's repeated visits.

Irresistibly drawn to Live Girls, Davey becomes involved with Anya, the woman he first encountered there. Amid the raw, blood-tinged sex, the reader immediately recognizes what she's doing to him, something he takes a while to figure out. His compulsive desire for Anya battles with the scruples inculcated by his fanatically religious mother. Walter approaches him on the pretext of an interview for an article and notices Davey seems ill, afflicted the same way Walter's brother-in-law was. Davey's female friend Casey also becomes concerned about his health and gets involved. Together investigating Live Girls and its sister establishment, the Midnight Club, they realize actual, supernatural vampires lurk there.

LIVE GIRLS will appeal to hard-core horror fans. Especially frightful are the grotesque, yet pitiable creatures whose transformations have gone wrong. Although this isn't primarily a sympathetic vampire novel, neither does it fall under the "all vampires are evil, destroy on sight" trope of classic horror. The undead antagonists are balanced by two characters—Davey and Casey—being transformed into vampires against their will. The good guys triumph, sort of, but only at great cost.