While I love a good alternate history, Georgia Evans's World War II novel BLOODY GOOD (2009) is something slightly different, which I also enjoy very much, "secret history"—strange events lying behind and under the public history we know. Its premise is that Nazi Germany uses vampires to infiltrate England during the Blitz. Other Nazi vampires have appeared in fiction, of course, but never so delightfully as this. A small contingent of vampires parachutes into the countryside outside a placid village to sabotage the nearby defense plant. The local doctor, Alice Doyle, picks up an injured man who disappears immediately after she treats his wounds. He slips off to report to his contact, while another vampire soon takes up residence in the village, posing as the nephew of a spinster who's actually working for the Germans. Although these vampires are definitely evil, they aren't demonic and mindless; they have personalities and rational motives. Also, we meet a character late in the book who demonstrates that vampires don't have to be villains. A conscientious objector, Peter Watson, is assigned as Alice's assistant as well as part-time medic for the defense factory. At first Alice scorns Peter for what she stereotypically assumes to be "cowardice," but his intelligence and courage soon become clear, and they fall in love. 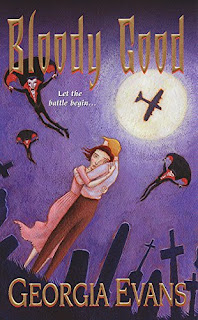 Alice's grandmother claims to be part pixie, a claim Alice has laughed off all her life—until she can't ignore the supernatural threat to the community and must accept her own latent power. We also meet a were-dragon and a were-fox, who play central roles in the other two books of the trilogy, BLOODY AWFUL (2009) and BLOODY RIGHT (also 2009). Brief scenes set in Europe follow a subplot about a fairy coerced into helping the Nazi vampires. The life of an English village in wartime is vividly portrayed, and the characters drew me in instantly, especially Alice. I love all the realistic details of the time period. Since "Georgia Evans" is a pen name for veteran vampire romance author Rosemary Laurey, the quality of these novels comes as no surprise.

Posted by Margaret Carter at 8:09 AM