Now that ten years have passed since the release of BEYOND SUNDOWN (2011), the last novel in Elaine Bergstrom's Austra family series, it falls within my self-imposed time limit for these "retro review" blog posts. Even staunch fans of SHATTERED GLASS and its prequels and sequels might have missed this final book, since it was independently published. BEYOND SUNDOWN could be read on its own but would hold much greater meaning for readers familiar with at least SHATTERED GLASS. The action takes place in Romania and Canada, mainly right before and after the fall of the Ceaușescu regime, with a flashback to the prehistoric era when the Old One, progenitor of the Austra clan, arrived on Earth. We witness how, marooned on this planet, he bred with human females to engender descendants who share his nature. The story reveals new information about the Austras' culture and customs. The principal narrators are Patrick, Stephen Austra's son, and Michael, formerly human and recently converted. (These vampires, although members of a different species, can transform their human kin into beings like themselves through blood-sharing.) Thanks to their mind-merging power, however, we get viewpoint scenes from other characters as well. Stephen himself, for example, and the fiercely passionate, murderous, half-mad Catherine, along with her half-human minion whom she promises vengeance against the jailers who tormented him for years. 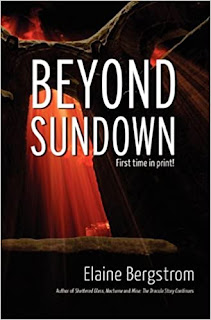 The climactic crisis unfolds when Catherine gets possession of a radioactive bomb—the one substance even more lethal to vampires than to ordinary human beings—and climbs the mountain to the Old One's stronghold. The resulting catastrophe becomes the catalyst for a world-shaking event. An alien spaceship lands on Earth, piloted by starving refugees from the Old One's homeworld, in desperate flight from planet to planet. The Austras must decide how to deal with their long-lost kin while concealing their own connection with the aliens from the human population.

BEYOND SUNDOWN provides an entirely fitting epic finale for Bergstrom's vampire series. Although the trade paperback is essentially unobtainable, you can buy the Kindle edition.