Richard Matheson, one of the great speculative fiction authors of the vintage pulp era and beyond, is probably now most widely remembered (outside SF fandom) for his works that have been adapted on film. For instance, THE SHRINKING MAN, filmed as THE INCREDIBLE SHRINKING MAN, and I AM LEGEND, filmed several times under various titles, with the oldest, THE LAST MAN ON EARTH, a low-budget Vincent Price movie, being the only one that attempts faithfulness to the book. Among others, the movies WHAT DREAMS MAY COME and LEGEND OF HELL HOUSE are adapted from Matheson novels, too. And remember the TWILIGHT ZONE episode "Nightmare at 20,000 Feet," starring William Shatner as an airline passenger who spots a gremlin on the wing of the plane? That's from a Matheson story. He also wrote prolifically for television. In print fiction, he created numerous vampire tales. Here I'll discuss just two, a pair of very different stories of child vampires, "Dress of White Silk" (1951) and "Drink My Red Blood" (1951), the latter also published under the titles "Drink My Blood" and "Blood Son."

Matheson generates sympathy for his child protagonist in "Dress of White Silk" (1951) by having her narrate her experience in the first person. She's an orphan living with her grandmother and cherishing two mementos of her mother, a photograph and the titular white dress. A naive protagonist whose comprehension falls far short of the reader's, the little girl, because of her youth and inexperience, remains ignorant of the meaning of her own revelations. The opening of the story tells us, "Granma locked me in my room and wont let me out. Because its happened she says. I guess I was bad." The unnamed little girl enjoys visiting her late mother's bedroom and playing with the dress. One day she shows the dress and her mother's picture to a friend, Mary Jane, who objects to the darkness in the house. Representing the viewpoint of the "normal" outside world, Mary Jane says that the mother's room "smells like sick people," the dress "smells like garbage" and "has a hole in it," and the adored mother has "buck teeth" and "funny hands." The dress then takes possession of the narrator, who remembers only a sense of being "like grown up strong." In conclusion, locked in her bedroom, she defiantly claims that her grandmother "doesnt have to even give me supper. Im not hungry anyway. Im full."

The reader, more sophisticated in vampire lore than the narrator, recognizes the clues. We know the traditional association between vampires and the stench of decay, strongly emphasized in DRACULA, and we realize the hole in the white silk dress may be the mark of a stake. We decode the mother's "buck teeth" and "funny hands" as fangs and claws. We infer that during the gap in the little girl's memory, she drank the blood of her playmate. We pity her not only because she's a lonely orphan but because she acts from instinct, not malice. As for the grandmother, she transgresses conventional morality to shelter her daughter's child. She obviously knows about the lethal inheritance carried by the little girl but takes no preventive action, aside from the vain prohibition against entering the dead woman's bedroom. She says of her deceased daughter's gown, "I should burn it up but I loved her so." In denial about her daughter's true nature, the grandmother constantly tells the child that her "momma is in heaven." Both characters, with their shared love for the dead woman, evoke more sympathy than Mary Jane, with her callous taunting. The "normal" point of view is marginalized while the reader is invited to empathize with the "monster." 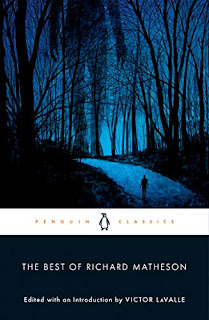 By contrast, in "Drink My Red Blood" (1951), also published under the titles "Drink My Blood" and "Blood Son," Matheson uses an omniscient narrator to maintain an ironic distance from the boy protagonist, Jules. Like a changeling foisted on a human household by malevolent elves, Jules appears to be a vampire boy brought up by unsuspecting human parents. The narrative hesitates between psychological and paranormal explanations for Jules's aberrations, with the former dominant until a surprise reversal at the climax. (I assume for the sake of argument that we're meant to read the final scene as factual within the text, not a hallucination. I believe Matheson's omniscient narrative voice supports this reading.) Neighborhood rumors claim Jules was born with teeth "on a night when winds uprooted trees" and sucked his mother's blood with her milk. His parents, bewildered by his oddities, try to rationalize or suppress them. They suspect him of being retarded until he finally begins to speak at age five, with the word "Death." They combat his interest in death, blood, and vampirism by vainly trying to prevent him from reading DRACULA over and over. They finally give up on him when they can't force him to go back to school, after he reads aloud a composition titled "My Ambition by Jules Dracula," in which he expresses his fervent wish to become a vampire. At first the parents of the other students don't believe their children's reports of Jules's outburst, but upon reflection "they thought what horrible children they'd raised if the children could make up such things." Jules is stigmatized as Other in order to protect the supposed innocence of his classmates.

Depressed, obsessed with a search for "something; he didn't know what"--perhaps his own kind--Jules comes upon a vampire bat at the zoo: "He felt in his heart that it was really a man who had changed." Night after night, Jules sneaks away from home to work at the wire on the bat's cage. Finally he frees it, takes it to a deserted shack in an alley, and feeds it his blood, crying, "Count!...Drink my red blood! Drink me!" As his blood drains away, Jules appears to awaken to the true nature of his obsession: "Mists crept away in his brain. One by one like drawn veils." This dismissal of his lifelong abnormality as a delusion, however, does not constitute the narrative's last word. If he's literally a vampire child after all, how did Jules's family give birth to this inhuman offspring? Was his mother raped by a vampire? Or is Jules the product of recessive genes, a hereditary taint? Or was he, perhaps, a monstrous infant insinuated into a normal family like a cuckoo's egg in another bird's nest? Matheson offers no answer.

Both "Dress of White Silk" and "Blood Son" can be found in the 2017 collection THE BEST OF RICHARD MATHESON, along with many other mind-blowing stories of fantasy, horror, and science fiction. All horror fans should become familiar with this fantastic (in both senses of the word) author.

Try not to burn through your time in getting Dwarka accompanies

Get Services: Call Girls in Dwarka


Phenomenal Lavish escorts administration in Gurgaon on your offer

Go With: Escorts in Gurgaon

Go With: Call Girls in Haridwar