NICE GIRLS DON'T HAVE FANGS (2009), by Molly Harper, begins the comedy-suspense-paranormal-romance Half-Moon Hollow series. Small-town librarian Jane Jameson tells her story in the first person, in an engagingly sardonic tone but not snarky enough to make her unlikable. I sympathized instantly with her being fired from her library position for budgetary reasons. She retreats to a nearby bar, where she meets a tall, dark stranger named Gabriel Nightengale (sic). After a long discussion about English literature, he walks her to her car, which she begins carefully driving home. When it breaks down, she staggers into a ditch, gets shot by mistake for a deer, and awakens as one of the undead. Not unnaturally, when she finds herself in a bed in Gabriel's house, she suspects him of drugging and kidnapping her. Once he manages to convince her that he's a vampire and now she is, too, she's less shocked than we would be.

In this version of the present-day world, vampires came out to the public shortly before the turn of the millennium. Although legally protected for the most part, they're still viewed with distrust by most people, with the killing of a vampire by an ordinary mortal automatically classified as self-defense. The majority of vampires lead peaceful existences, as they always have, now with the convenience of openly willing donors, bagged blood, and even synthetic blood. While the sun doesn't necessarily destroy them, they're highly vulnerable to it, although they can go out in daylight in some circumstances. They're sensitive to silver, but reactions to religious objects depend on their beliefs during their mortal lives. As Jane discovers to her dismay, ordinary food tastes like ashes. She gets much of the necessary background information on her altered lifestyle from THE GUIDE FOR THE NEWLY UNDEAD, quotations from which serve as the novel's chapter headings. 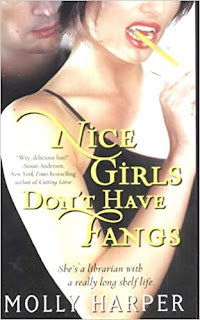 She returns home, where her undead extrasensory perception reveals that she's sharing the house with her recently deceased elderly aunt. Jane conceals her changed status from her living family members, a choice that seems to me like an unnecessary complication, given that everybody knows vampires exist. This deception doesn't extend past the first book, anyway. The town's vampire community takes in the heroine, leading to a job in a telemarketing call center, which turns out as dismal as one would expect. The dominant member of the vampire equivalent of the welcome wagon, Missy, develops from an annoyance to a serious antagonist. Jane gets accused of murdering another vampire and has to face the local vampire council. Meanwhile, naturally, romantic tension builds between her and Gabriel. In a later book, she works in an occult bookstore, a job much more suited to her temperament and skills. In the second volume, werewolves take center stage, and judging from the titles of some novels in the expanded series, witches and other supernatural-related beings hang around Half-Moon Hollow, too.

The breezy narrative style entertained me without becoming insufferably irritating like Betsy's voice in Mary Janice Davidson's series (as I, at least, found it after a couple of books). The setting and characters of NICE GIRLS DON'T HAVE FANGS supply quirky variations on the contemporary fantasy trope of a community where supernatural creatures exist side by side with mundanes. The series offers suspense, lovers' trials, and occasional danger along with lots of humor, as the heroine adjusts to unlife in a small-town, suburban environment.

Posted by Margaret Carter at 10:00 PM