As suggested by the title, A VAMPIRE CHRISTMAS CAROL (2011), by Sarah Gray, is another posthumous "collaboration" similar to PRIDE AND PREJUDICE AND ZOMBIES and LITTLE VAMPIRE WOMEN (reviewed here last month). Subtitled "Ebenezer Scrooge, Vampire Slayer," Gray's adaptation of A CHRISTMAS CAROL depends less on incongruity than many of those works. It isn't that much of a stretch to envision Scrooge stalked by vampires as well as haunted by ghosts. A VAMPIRE CHRISTMAS CAROL also alters and embellishes the plot of its model more than many other such adaptations do. For example, Scrooge's former fiancee, Belle, appears in the present and plays a vital role in Scrooge's redemption. Remaining in touch with him and never having married, she hosts a house of refuge for vampire hunters. As far as Scrooge's membership in the fraternity of slayers is concerned, the book's subtitle applies only to the final section, after he awakens on Christmas morning prepared to do his part in the battle against evil. 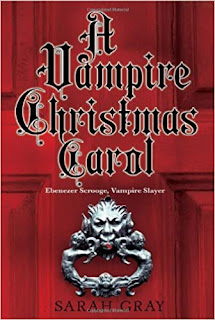 In this alternate England vampires are known to exist, although not everyone believes in them. Scrooge is one of the skeptics, applying his "Bah, humbug" philosophy to the notion of vampires as well as Christmas and charity to the poor. In this version of the tale, he employs two clerks, one of whom is a minion of the undead. On the other hand, Bob Cratchit and Scrooge's nephew, Fred, are hunters. The tenants in the cellar of Scrooge's own house are vampires, unsuspected by him. In answer to Belle's prayers, Marley visits Scrooge to set him straight on all those matters as well as the truth of his own past. Under the guidance of the Ghost of Christmas Past, he learns how the Queen of Vampires has dominated his fate from the shadows for his entire life. In this novel vampires are irredeemably evil, and the author plays the horror absolutely straight.

A VAMPIRE CHRISTMAS CAROL, in my opinion, elaborates on the classic novel enough to qualify as a work of fanfiction rather than a simple parody.

Posted by Margaret Carter at 11:00 PM